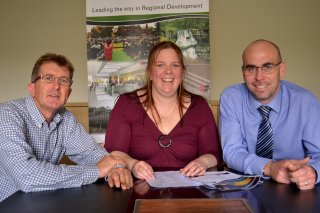 Regional Development Australia Northern Inland (RDANI) has released the findings of its investigation into the skill shortages and other labour challenges in the region. Data now supports what has long been suspected; Northern Inland business growth is being throttled by the difficulty in finding and retaining skilled and experienced employees across many industries throughout the region.

More than 100 employers from throughout Northern Inland NSW participated in the comprehensive online survey over the past 12 months. Results have been collated, conclusions drawn and they are presented in the RDANI ‘Skills for the Future’ report, which the organisation’s Chair, Russell Stewart considers an important resource for working to support the economic development of the region.

“We now have the evidence-base to better target our efforts to address local employers who struggle with labour challenges,” Mr. Stewart said. “Through local knowledge, our Committee and staff had a good understanding of our region’s skill shortages and business growth barriers but now we have facts and figures to underpin the work of Regional Development Australia Northern Inland.”

“Over 80 percent of businesses surveyed reported difficulties in filling job vacancies, while 75 percent said that industry experience is more valued than qualifications, indicating how retention of staff is as critical a challenge as recruitment,” he said.

“In undertaking this survey, our message to businesses was ‘help us to help you’ and we were delighted to hear back from so many different businesses, large and small,” Mr. Stewart said.

From Moree to Armidale, Willow Tree to Tenterfield, the Northern Inland region of NSW is dependent on agriculture as its predominant economic driver and has seen unemployment figures consistently higher than the NSW average over the past six years, with youth unemployment concerns prompting renewed focus on innovative programs, like RDANI’s Wool Works Shearing School. The trend is not expected to abate with the ongoing drought.

Population decline in some parts of the region has exacerbated skill shortages, while a lack of access to formal training and the centralisation of TAFE courses have also reduced the local skilled labour market, impeding business growth. Consistent feedback during RDANI’s skills audit investigations was that finding staff with work readiness or work ethic can be more important to local employers than finding staff with the skills they need and can be an even greater source of frustration.

Executive Director of RDANI Nathan Axelsson said that the Skills for the Future report was a large undertaking that created a resource for the region and it can be accessed online at www.rdani.org.au/skills.  “Our staff members, David Thompson and Rebecca Wright did a great job in crunching the numbers and presenting them in a very accessible report,” he said. “It also illustrates the vital role that RDANI’s Skilled Migration programs have in helping to address local labour needs.”

“Skilled Migration is not a silver bullet. It is also important to stem the outward migration of our quality young people and to ensure education, training and job opportunities are available locally. However, the settlement of skilled migrant workers in the Northern Inland is clearly a necessity, despite the recent political and media hype about reducing migration numbers,” he said.

“This survey has provided a localised snapshot of skill shortages and other labour market issues. Issues around job vacancies, skills shortages and youth unemployment are not accurately reflected by job advertisements, which are the traditional source of job and unemployment data. Employers know from past recruitment efforts and local knowledge if advertising for a skilled position will be worth a go or a waste of time and money,” Mr. Axelsson said. “The data we have produced reflects real insights, direct from local employers.”

The employer survey project received funding from the NSW Department of Premier and Cabinet.