Growing the digital economy in the region is one of the key objectives of RDANI.

RDANI has developed a Digital Economy Strategy for Businesses throughout the region focusing on how high‐speed broadband can contribute towards growth of existing private sector businesses, together with opportunities for ‘new’ technology firms to establish themselves in the region.

With funding from the Department of Regional Australia, RDANI completed the Digital Strategy in October 2013.

In terms of new economic advantages currently entering a traditional rural regional community like the Northern Inland area there can scarcely be a more significant opportunity than that of the Digital Economy. Supported by projects like the National Broadband Network - irrespective of the fibre versus copper debate – the economic advantage to the Northern Inland region alone is forecast to be worth between $231m and $1.3 bn in uplift to the Gross Value Add [GVA] to this region annually.

Communities need to be ready to adopt and adapt adequately to the opportunities afforded by the Digital Economy. Disregarding the opportunities is no safeguard to sustainability though; as Sir Richard Branson has said "companies that don't take the internet, or twitter, or Google+ seriously, do it at their own peril.’

This strategy comes at a pivotal time in the development of the economy in the Northern Inland as a region. All the indications are that there are significant signs of positive activity, and in some cases powerful signs of digital championing; but there is an equally significant and urgent need to do more and quickly.

Digital maturity in business scores lower than the average for Australia which is seen as an advanced nation in terms of global scoring. There are a host of problems hindering digital growth at this time in the region, but the good news is, that these issues can be remedied adequately as resourcing is applied over the next three years in particular. 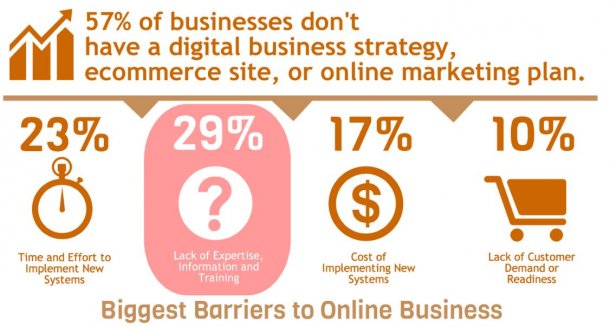 Typical issues encountered include problems with digital and technical resourcing for business; digital literacy (knowing what can be done online as well as how to do it) is lower than expected. To a degree the competitive nature of business drives transformation in this area, however if the local resource or online capability is lacking then this is harder. The research argues clearly for the need for more local digital talent to be made available to support businesses. Some of this is coming now with the advent of the NSW Chamber of Commerce’s very successful workshops on business innovation [http://newiq.com.au/] in the region, as well as the Digital Enterprise Programs run by the NSW Chamber of Commerce, and Armidale Dumaresq Council. But more needs to be done to help businesses transform.

Currently, 86% of businesses in the region do not sell online in any capacity. Given that the national figures for ecommerce are suggesting that even 40% of over 65 years olds are buying online, retailers need to migrate into this region and support more local, state, and national opportunities to sell online.

In addition, the ‘digital divide’ in terms of ubiquity of access to broadband technology, which is usually portrayed as existing between the larger metro-political capitals and rural/regional Australia, is in fact exacerbated in the Northern Inland region.

For example, there is significant disparity occurring regionally between towns and cities like Tamworth and Armidale, who are early receivers of Super-Fast Broadband, and those further North, but especially West of the New England Highway. Whilst this is good news for towns who receive super-fast broadband, it can only hinder other towns from making the same savings or expansion to business in the digital world now.

Almost 60% of businesses have reported that they have no strategy for online marketing or ecommerce, or digital business generally. This figure is not uncommon compared to other regions and even larger city centres, however, the effects of not having a strategy can be devastating when the commercial imperative is to transform digitally. Compare this slow transformation to the growth in online shopping alone in Australia which has grown from $28 bn to $37 bn in the last three years alone, and the imperative should be clear.

In spite of these inhibitors to digital change the region is not, however, without digital championing. Some remarkable standout examples have been captured across the region including organisations and innovations such as TAFE and UNE’s EduOne, Armidale Broadband Smart House, the Digital Local Government Program in Armidale, Photo Create in Glen Innes, Stillettoz in Narrabri, the Sweet Place in Uralla, RDANI’s Business Growth Program, NSW Chamber’s Digital Enterprise Program, and not least the most recent Digitally motivated event at Wee Waa to launch global electronic band Daft Punk’s
latest album to the world.

Digital championing is important because it demonstrates both leadership and the emergence of digitisation across the region, all be it in small isolated pockets.

Generally though, the trends in the Northern Inland region indicate that businesses are not able to make the jump that is required to transform their business and embrace the digital economy.
This strategy must target its solution at the problem by attempting to focus its activity on fixing the underlying issues for businesses and going straight to the heart of the problems as they have been presented during the research.

In simple terms those problems have presented as follows:

Value of the Digital Economy

In addition to ongoing commercial activity there are positive signs of change and championing that will assist in driving a digital economy forward in the Northern Inland region. To begin with there is some significant indication that leadership is occurring around some of the strategic requirements for change. Although there is an absence of strong or clear strategy at a small business level around the region, more businesses and in particular, councils are recognising the need to move strategically and lead change more fully in the digital space for economic and community engagement reasons.

It should be noted though, that the region has significant inhibitors to the introduction of a digital economy, most notably in the area of enabling elements for change.  Other traditional challenge to digitisation will be felt in relation to digitisation with ubiquity, affordability, reliability, and speed.

There is some considerable argument about the value of the digital economy globally. This currently produces ranges from 5% to 6% at the lower level, and up to 20%+ at the higher level on GDP. 2 Also, it is important to note that the digital economy is not a single element to an economic profile. For example, whilst it does contribute to an increase in GDP in the form of increased revenue and increased profitability, it can also be experienced as capital expenditure savings, or increases in productivity and efficiencies etc, the latter are hard to quantify in economic terms. The International Teleworking Association and Council [Pratt] has argued that teleworking increases productivity by 33% but this will produce different results financially on the balance sheet dependant upon each different type of organisation being productive.

To avoid over speculation in the value of the digital economy for the RDANI region it is suggested that values be examined from the perspective of Gross Value Add [GVA] on top of Gross Domestic Regional Product figures with a sensitivity value spectrum that incorporates a range from LOW, MEDIUM, HIGH through to an OPTIMISED level where commercial digitisation can be valued at the higher levels. 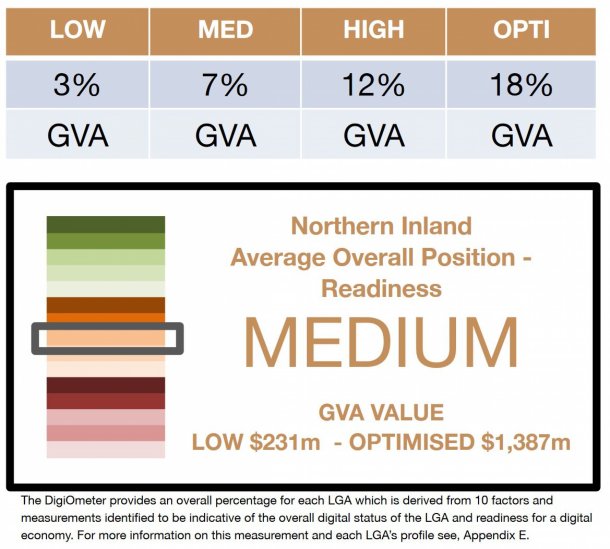