The number of job vacancies advertised online for the Northern Inland reached an all-time high in April 2021. According to the Australian Government’s Internet Vacancy Index, these record highs are continuing, even during the recent public health orders in the region. The level of job vacancies in the region are now double pre-covid levels in January 2021 and are 40% higher than pre-drought levels in July 2017. The data is even more stark when considering ‘grey’ jobs that are not advertised online or at all.

With the reduction of public health orders in late 2020, combined with continuing recovery from the drought, the number of job listings increased quickly, reaching pre-drought levels by September 2020. Since then, it has continued to grow to record levels, reaching an all-time high in April 2021, with over 1,000 job vacancies. Although listings decreased in line with the latest public health orders, levels have remained high and reached the highest ever levels in August.
The total number of vacancies in New South Wales also shows a similar trend, as illustrated in Figure 2. However, the impact of the drought is not as prolonged, with the state total not dropping until almost two years after the Northern Inland. 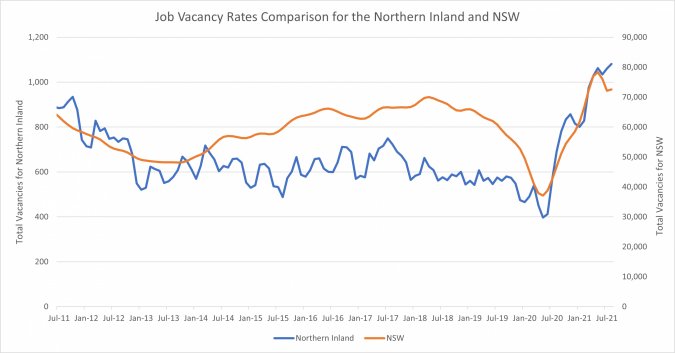 For some, an all-time high for job vacancies is good news. It provides job seekers additional choices, and it is a positive factor for attracting new residents to our communities. The top 5 categories of advertised vacancies for our region in September 2021 were Professionals (Health, Social, Welfare, Business, Engineers), Labourers, Technicians and Trades Workers (Automotive/Engineering, Food Trades, Construction), Clerical and Administrative workers and Community and Personal Service Workers (Carers, Hospitality). The lack of work in regional areas has been a long-held misconception, and objective data such as this can help dispel these myths. However, these large vacancy numbers mean something different for employers. Instead of being a good thing, it signifies an ongoing challenge for our region.

Our region’s employers have long been voicing their concerns about the inability to source skilled and unskilled workers. Being unable to fill vacant positions impacts their ability to grow and sometimes even survive, greatly restricting the capacity of our region’s economy. The increased number of job choices for prospective employees creates even greater competition for employers to attract workers from the already limited pool of workers. Many employers have been seeking staff for so long they have given up on advertising the position. Jobs such as these and others not advertised online are not included in the job vacancy data, as it relies on the number of jobs advertised online. Therefore, the number of vacancies in our region is even higher than these numbers suggest.

Job vacancy rates at these record highs indicate the pressing need to develop initiatives to address them. Short- and long-term programs will need to be developed utilising a range of measures, including re-skilling and up-skilling current residents, availability of training courses, School-based training, attracting new residents, and appropriate Skilled Migration programs. Further barriers including housing shortages also need to be addressed. How this is done and ensuring it aligns with the needs of employers and communities in the region will be critical for the future development of our regional economy.