The True Value of Home Solar - Crunching the Numbers

Installing a home solar system can still be a good financial move but it is a big investment that can be deceptively complicated, according to Regional Development Australia Northern Inland (RDANI) Senior Project Officer David Thompson. “If done correctly, home solar will reduce the size of your electricity bill, and can earn you money by selling excess electricity which you don’t use into the electricity grid. However, the numbers presented by retailers can be complex and make comparisons challenging.”

“Solar companies are currently door-knocking in our region offering discounted solar systems. For the average household, they may show you calculations of how their system will save you $3,000 per year or more in electricity costs, and as a result, the system will pay for itself in around three years,” he said.

“This can be correct, especially if you use a lot of electricity during the day when the sun is shining, but before signing on the dotted line, you need to understand exactly how solar saves you money, and how estimates of the savings can be overstated.”

Figure 1 explains how a solar system can save and potentially earn money for a homeowner. 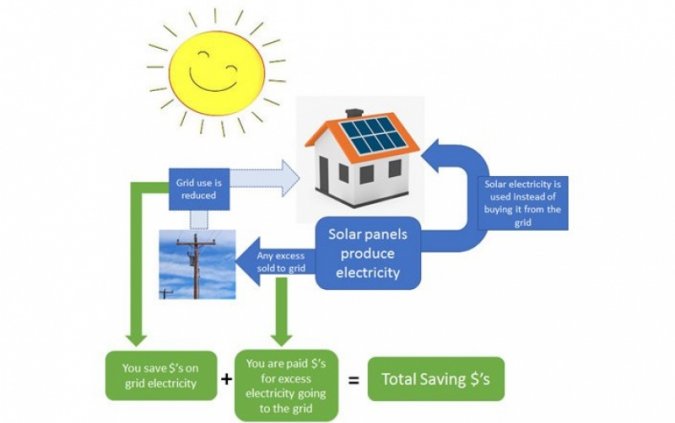 Figure 1. How Solar Saves You Money

“You save money by generating your own electricity via the solar panels, so don’t have to buy it from the grid,” explained Mr Thompson. “You earn money by selling any excess solar electricity that you don’t use at home back into the grid. New regulations mean the price you will get for this electricity (called a feed-in tariff) has recently increased – which is good news”

Sometimes the most obvious limitation to solar power is overlooked. “Both the savings and the potential earnings only occur when the sun is shining! So, unless you can store the electricity in a battery, you only save money during daylight hours,” Mr. Thompson said.

This is important, because when some solar companies crunch the numbers, they will say something like “OK, this 6 kilowatt system will generate 36 kilowatt hours (kWh) per day of electricity, and I can see from your bill that on average your house uses 17 kWh per day, so you will eliminate your grid electricity use entirely and have 19 kWh hours per day of surplus solar electricity to sell back to your electricity retailer (Origin, AGL, DoDo, Red Energy, Momentum Energy or whoever you are with) for let’s say 15 cents per kWh (see Figure 2).”

“But in fact, you are not offsetting the entire 17 kWh per day that you use, only the portion you use when the sun is shining, because at night, your system produces no electricity.”

“For a typical 4 bedroom house without a pool and where no-one is home all day, the energy use during those sunshine hours may only average 5 kWh per day.  Much of the remaining 12 kWh is being used at night, early morning or late evening when your solar system is generating little or no electricity.”

“They may over-estimate your electricity savings because (unless you have battery storage), you are not getting the entire 17 kWh per day free from the sun, but perhaps only 5 kWh per day. The other 12 kWh must be bought from the grid.”

“On the plus side, the 12 kWh generated by your solar system which you are not using goes back into the grid for someone else to use, and you might be paid about 15 cents per kWh for that, due to recent regulatory changes.”

Mr. Thompson also explored how much electricity a solar system really generates. “A system’s power generation capacity is largely determined by its size, described in kilowatts (kW), and the number of daylight hours during which it will generate electricity.

Research in respect to Armidale indicated that on average over a year, a household would achieve 4.5 hours of energy generation per day, so for a 6kW system, that means 6kW times 4.5hrs, totalling 27kWh generated per day.

However, some companies are doing the maths for Armidale based on 6 hours of generation, which boosts the total electricity produced to 36kWh.  This is a significant difference, and has an even bigger impact on the financial benefit (see Figure 2).” 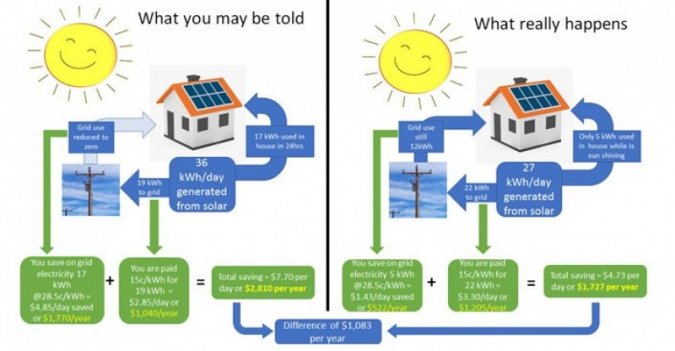 Mr. Thompson’s advice to the region’s householders who are contemplating a solar system is consider facts in relation to their individual circumstances. “The bottom line is that in most cases, installing solar can save you money.  But the return on that investment can vary considerably depending on the size of the system, the cost of the system, your pattern of electricity use, and how much electricity your system actually generates,” Mr. Thompson concluded.