Attracting new residents from capital cities to regional areas has long been a key weapon in the regional economic development armoury.  However, a closer examination of the migration data for Northern Inland NSW from the 2011 Census indicates that it may be a tactic in need of a re-think, as most of our new arrivals do not come from Sydney, though Sydney does remain an important source of net inward-migration.

At RDANI, we take the view that while there is probably more mileage to be gained from helping existing businesses to grow, there is little doubt the tree and sea-change phenomenon can’t be ignored.  Worn out capital city folk can sell their properties for a small fortune, and pick up a better property in Northern Inland NSW for a fraction of the cost.

At present, there are three main campaigns running in NSW to attract residents to our region:

There are other programs which assist people to relocate to regional areas including:

However, the information provided in the next section suggests that it is not just capital city residents we should be targeting in an attempt to grow our populations and businesses.

The recent 2011 Census data (ABS 2011) allows us to drill down into the migration data and see where in-migrants come from, and where out-migrants go to.  These statistics are based on a person’s usual place of residence 5 years ago (i.e. in 2006).

New Arrivals to the Region

Figure 1 shows the main sources of new migrants (19,408 people in total) to our region. 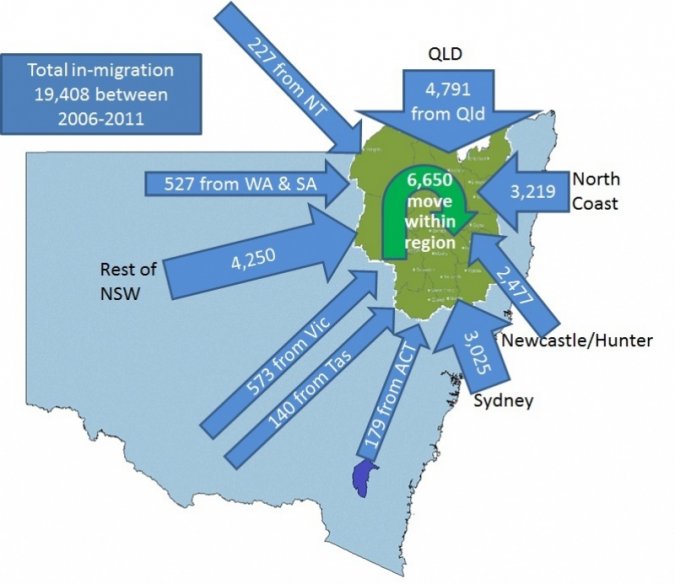 Departures from the Region

Figure 2 shows the main destinations of people leaving our region (20,555 people in total). 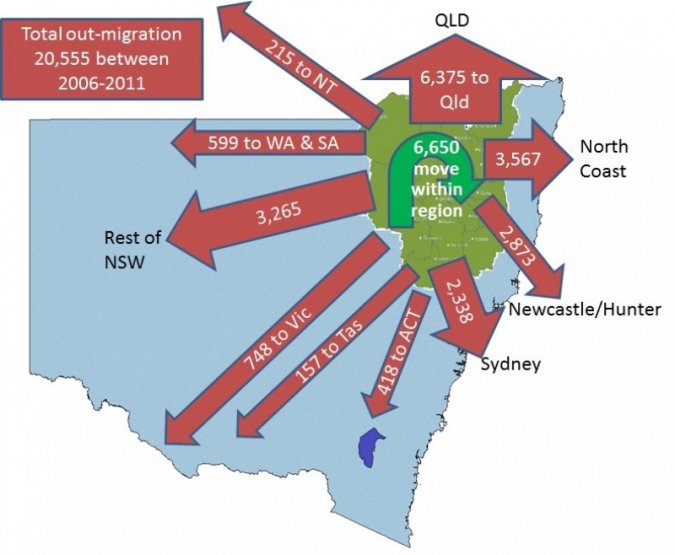 Net Migration for the Region

It is noteworthy that more people left the region (20,555) than re-located to the region (19,408), showing that between 2006 and 2011 Northern Inland NSW experienced a net migration loss of more than 1,100 residents. Figure 3 reveals the distribution of net migration patterns by region. 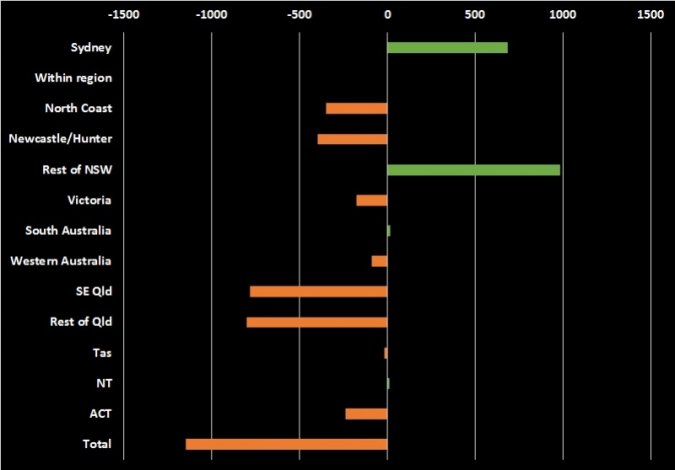 Net Migration by Destination for Northern Inland NSW, 2006 to 2011

It is clear from Figure 3 that Sydney and the Rest of NSW remain important sources of net inward migration for our region.  Queensland is the biggest drain on residents from the region, followed by the Newcastle/Hunter and North Coast regions.

The Age Composition of Migration

Figures 4 and 5 show the age composition of outward and inward migration respectively. 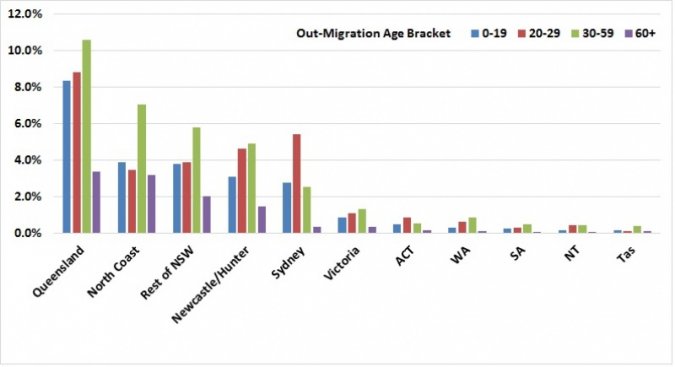 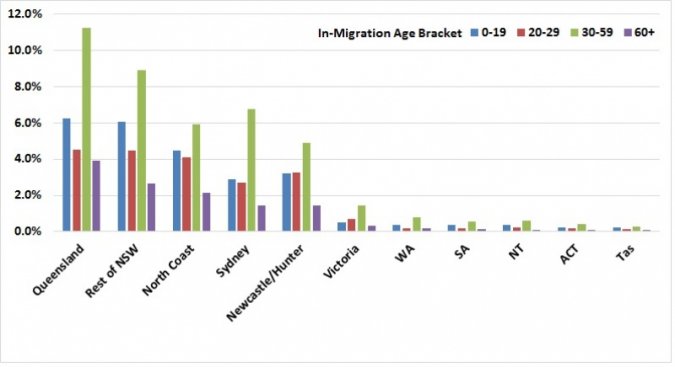 Most new residents coming to the Northern Inland region do not originate from Sydney, they come from Qld, other regional areas of NSW or the North Coast of NSW.  While Sydney is an important source of net in-migration, the data raises questions about where our resident attraction efforts should be directed.

We are losing most of our more highly skilled working age people (30-59) to Queensland, the North Coast, the Rest of NSW and the Newcastle/Hunter regions.  We are losing most of our youth (20-29) to Queensland and Sydney.  This loss of youth is not such an issue, so long as we can attract them back to the region once they have gained education, skills and experience.  The data suggests we are able to attract them back from Queensland once they reach the 30-59 age bracket, but less so from Sydney.  Other locations seem to be more important sources of working age people with families.

The RDANI ComeOnInland campaign could look toward more activities which specifically promote the region into Queensland, the North Coast of NSW and perhaps other areas of regional NSW.

This information raises questions about the cost-effectiveness of promotion measures such as Expos specifically aimed at Sydney residents.  Perhaps these measures should be expanded, or rotated to include the Gold Coast, Brisbane and major population centres on the North Coast of NSW?

With regards to people leaving the region, particularly the large numbers moving to Qld and the North Coast, it would be interesting to know the key reasons behind the move, though sourcing that information would be next to impossible, unless individuals could be specifically identified and surveyed via the ABS Census information.  The fact remains that Qld and the North Coast of NSW are an important source of net population loss to our region.