Skilled migration: From Paris to Urbenville 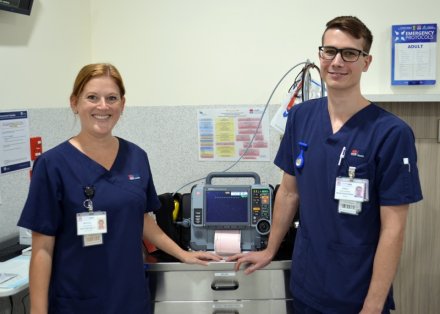 Urbenville Health Service Nurse Manager Nicole Ellevsen and Registered Nurse Arthur D’Artagnan, who grew up in Paris and migrated to Urbenville, thanks to RDA Northern Inland.

Skilled migration is much more than a band-aid solution for country health services struggling to attract health professionals to the Northern Inland New South Wales region.

Nestled in the remote north-eastern corner of the Northern Inland region of NSW is the picturesque township of Urbenville. As is the case with many small towns, the Urbenville Multipurpose Health Service struggles to recruit Registered Nurses. Regional Development Australian Northern Inland (RDANI) brought Arthur D'Artagnan to the region as a skilled migrant, through the Skilled Regional State Nominated (489 sub-class) visa program and it has been a win-win, according to RDANI Executive Director Nathan Axelsson.

“Arthur D'Artagnan came from Paris, France to complete his nursing qualification in Sydney and ended up working in a remote Australian town bounded by rugged mountains that form part of the Great Dividing Range. The closest major towns are Tenterfield and Lismore, which are two hours and one and a half hours away respectively by car. An overwhelming culture-shock might be expected but Arthur has loved his Urbenville experience, particularly the support he has received from locals and colleagues,” RDANI Senior Skilled Migration & Project Officer Gary Fry said.

“Thanks to Skilled Regional NSW State nomination through RDA Northern Inland, the Urbenville Multipurpose Service (MPS) gained an enthusiastic Registered Nurse (Critical Care and Emergency). Meanwhile, a small country health service represents a comprehensive career foundation and Arthur has found the experience to be very rewarding. Skilled migration is not the only solution for our region’s skills shortages but in Urbenville, RDANI clearly helped to meet a significant community need,” Mr. Axelsson said.

Nancy Martin is the Executive Officer of Nursing, MPS Network in the Northern NSW Local Health District. “Our Urbenville site has 18 high-care beds, four acute-care beds, a community health service and an emergency department. We have difficulty in recruiting to Urbenville because of its isolation,” she said.

“Arthur came as a transition to practice Registered Nurse. He was quite junior when he started but he has been with us for nearly two years now. He has completed his first-line emergency care course, triage and advanced life support courses (adult and pediatric) and he is now going to be a basic life support educator,” said Ms. Martin. “Arthur is a pleasure to have at the site. We have nominated him to be one of our emerging leaders within Northern NSW LHD.”

Arthur is very happy with his decision to migrate to regional NSW. “My move to the country was very successful,” he said. “I’ve been able to gain skills and experience that I wouldn’t have been able to in a major city. I recently managed to become an advanced clinical nurse. So, I gained the skills to work as a more advanced nursing practitioner much faster than I would have in a big city.”

“Working in small country hospitals is a great move for any junior Registered Nurse or even a more senior RN who would like to expand their career, through broader experience. I have been really well received here,” he said.

The Story of Arthur D’Artagnan and his work as a skilled migrant Registered Nurse in Urbenville, Northern New South Wales, Australia is the 8th Regional Development Australia Northern Inland (RDANI) skilled migration case study video. It has just gone online and can be viewed by click HERE