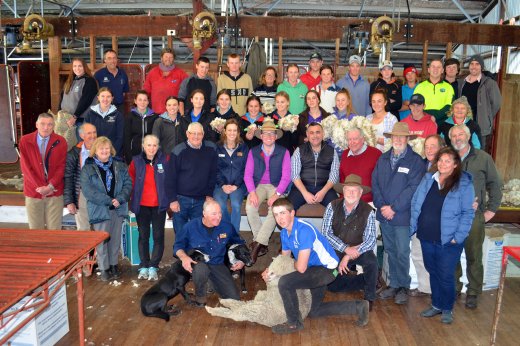 When Deputy Premier of New South Wales, the Hon. John Barilaro and Agriculture Minister, the Hon. Adam Marshall visited the Wool Works Shearing School last week, their reaction was one of shear delight.

The Regional Development Australia Northern Inland (RDANI) facilitated Wool Works Shearing School is held at the NSW Department of Primary Industries (DPI), Glen Innes Agricultural Research and Advisory Station. It introduces high school students to the skills of shearing and wool handling and the political leaders recognised it as a measure of inspiration that the industry needs.

“This is fantastic! This school is about introducing young people to the skill of shearing and a possible future in agriculture,” Mr. Barilaro said. “I saw kids here who were smiling, they were engaged and they wanted to be there. I think this particular program, with all the stakeholders coming together, has touched on something that gives us hope for the future of agriculture and our kids in the bush.”

Mr. Barilaro commended the approach of inspiring young students by giving them practical rural skills early on. “If you plant a seed early, you can nurture their interest and see it grow. This is really hands-on; they can see, hear, smell, feel, experience and respect the shearing and wool handling skills in the shearing shed. We know skills like these are being lost in agriculture across regional NSW but this a great way to inspire the next generation and we might just see some of these teenagers catch the bug and stick with it,” he said.

As Agriculture Minister and Member for Northern Tablelands, Adam Marshall also praised the Wool Works Shearing School, after both politicians had rolled up their sleeves and had a go. “Look, it is tremendous. I came for the first time in 2018 and thought that this is such a wonderful initiative and I wanted the Deputy Premier to see it. I don’t think this is being done anywhere else. Even if only one or two of these high school students go on to work in the sheep industry, shearing, then it’s been successful.”

“It was great to see the number of girls turn up. That is reflective of the trend in agriculture, generally. Women are playing an increasingly important role in our agricultural industries and I think that is brilliant,” Mr. Marshall said.

The visit followed their announcement of $1.25Mil. in funding for a revamp of the Glen Innes Livestock Selling facility, the first grant from the $170Mil. State Government Instructure Projects fund, designed to stimulate regional economies impacted by the drought.

RDANI Chair Russell Stewart made the political leaders aware of the fundraising efforts of the students from Macintyre High, who have been selling raffle tickets so they can travel to Bendigo, Victoria to compete in the National Sheep Show. The Deputy Premier opened his cheque-book and announced a donation of $5,000.

“We are producing great young people in our region and it is on us and our industries to show them they are and will be valued,” Mr. Stewart said. “Let’s help them to get relevant skills that enhance career paths and address our regional skills needs.”

Project Coordinator and RDANI Executive Director Nathan Axelsson said that there are three more Shearing Schools planned for 2019, with one locked in for October. “We want to hear from any interested high school teachers or students from years nine to 11.

Deputy Premier of NSW, the Hon. John Barilaro was under close supervision as he had a crack at shearing. Macintyre High School students and those involved in the Wool Works Shearing School at Glen Innes in June 2019.