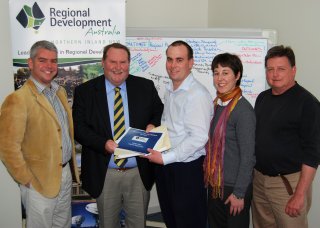 The final two community forums, in a series of 21 held across the Northern Inland NSW region over recent months took place in Guyra and Walcha on consecutive evenings this week. They contributed to the building of a Regional Plan that is increasingly important, in respect to what it will mean for the region’s communities. A total of 19 attendees came together in the Walcha Shire Council Chambers on Wednesday; farmers, business people, service club members and Council representatives were all vocally proud of their community and shared their views on what the area needs to stimulate sustainable growth. The meeting went for three and a half hours, culminating in concerns that plans had been contributed to and written in Walcha before without developmental results.

The Plan and the work of RDANI is expected to be all the more important given the millions of regional development funding dollars negotiated by NSW Independents, Tony Windsor (New England) and Rob Oakeshott (Lyne) after the recent Federal election.

“The Regional Plan will be an important tool for both Commonwealth and State Governments to guide them in their allocation of funding to regions,” Mr. Axelsson said. “The document looks at the key areas of economic development, environmental opportunities and social inclusion.”

Meetings also took place in centres such as Glen Innes, Deepwater, Tenterfield, Bingara, Barraba, Werris Creek, Quirindi, Manilla, Gunnedah, Inverell, Tingha, Warialda, Ashford, and Moree. Existing planning documents in centres such as Tamworth were integrated into the Regional Plan to avoid duplication. “We’re not trying to re-invent the wheel. We acknowledge that there are a number of existing plans in the region, including those from local Government. RDANI encompasses 13 Local Government Areas. Our Regional Plan has incorporated and collaborated with pre-existing data and will complement localised plans with a regional perspective,” Mr. Axelsson said.

“What we’ve learned through our community consultations has been combined with existing plans and demographic data and other sources of information to form our Regional Plan. RDANI will work to this strategic blueprint for the next five to ten years. It is a ‘living document’, meaning we can add to it or adapt it to changing circumstances.”

The community dialogues were professionally facilitated by members of locally based firm, Starfish Enterprises. Spokesperson, Adam Blakester said: “We’ve run community dialogues quite differently to standard consultations. We’ve had a wide range of people in 21 communities come together and indentify sustainable development priorities from their own local perspectives. So the Regional Plan reflects their views. Usually, a set of priorities are drawn up and communities are consulted about them.”

“In addition to health, communities were concerned about job numbers and sustainable population growth. Other priorities were the attraction and retention of skilled workers, and the development of new and existing enterprises (which is where the National Broadband Network fits in).”

“There’s an awareness now, among many of the region’s communities, that they’ve got very similar priorities. There is a growing willingness to work together. We’ve seen united, regional efforts to attract new residents and professionals from the big cities,” he said. “We’ve seen real determination at our meetings, a galvanising of communities to succeed with the sustainable development of the Northern Inland.”

Walcha Shire Mayor, Cr. Bill Heazlett welcomed the opportunity for Walcha to contribute to the Regional Plan. Health was among the top concerns in the region’s smaller communities. Walcha is currently the exception, being well serviced by GP’s and aged care facilities. The consequences of poor or non-existent public transport in small centres was an issue raised at various meetings, including Walcha. “Here in Walcha, people said ‘we’ve been there and done that’, this was an opportunity to perhaps do something differently. They’ve encouraged Council to take a leadership role, but involve partner organisations like RDANI, and I’m optimistic about positive outcomes,” he said.

The RDANI Regional Plan will incorporate input from the Guyra and Walcha communities. Mr. Axelsson said that the region’s councils will be sent a draft copy in coming weeks. “It is an ongoing process and further feedback from the local communities will be sought before we have a final document that will be a community and Government resource and will likely influence the strategic allocation of new regional funding dollars,” he said.