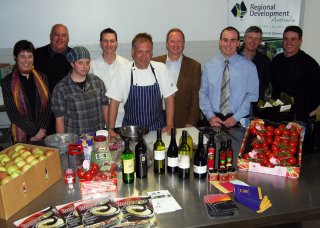 A Chef’s Workshop for Northern Inland chefs and apprentices was held in the new industry-standard hospitality trade school at the Presbyterian Ladies College in Armidale on Monday 30 August. Organised by Regional Development Australia Northern Inland (RDANI) and funded by Industry & Investment NSW, the workshop demonstrated what can be achieved with the region’s food and wine produce, thanks to the talents of internationally recognised Tamworth-based three-star Michelin Chef, Ben Davies.

“The interactive Workshop was a great opportunity for chefs and apprentices to learn about some of the top quality produce that can be sourced locally,” RDANI Executive Officer, Nathan Axelsson said. “Promoting greater use of and pride in the food and wine that we can find ‘in our own backyard’ will yield regional benefits.”

Chefs, apprentices and producers who attended the Workshop came from throughout the New England, from Tenterfield to Tamworth, and across to Inverell. Attendees, such as Josh Hutchinson, a qualified Chef at “The Tasting Room” in Glen Innes, remarked that their eyes had been opened to the premium quality of local produce and new, creative ways to prepare and serve local ingredients. Masterchef Davies worked his magic to create the following three courses, with purely local fare:

Mr. Davies said the Chef’s Workshop, as part of a broader strategy to promote the region’s food and wine industry was an important initiative. “Fresh is best. Food is freshest when served in the region where it is produced,” he said. “It’s more than a marketing tool, it’s economical. Plus, the local produce is first rate – we can be proud of it.”
Head Teacher of Tourism and Hospitality at Tamworth TAFE, Barry Pawsey also commended the concept, from a training perspective. “It makes business sense to source as much local produce as possible,” he said.

Regional Development Australia Northern Inland (RDANI) is a partnership between Australian, NSW State, and local governments to develop and strengthen regional communities. Our committee is made up of local leaders who volunteer their time to work with government, business and community groups to deliver better services to our region. The committee and staff work closely with local communities to find solutions to the economic, social and environmental issues affecting them.