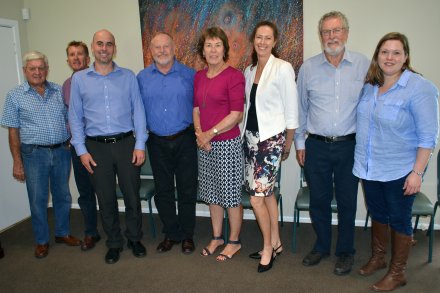 Regional Development Australia Northern Inland (RDANI) has been recognised as a high achiever among the 52 RDAs nationwide by the Australian Government, with the reward being the retention of its governing Committee for an extended term. “Our position of strength as an organisation has enabled the expansion of our many services,” said RDANI Committee Chair Russell Stewart. He praised the performance of his counterparts and Armidale-based staff at a recent RDANI Committee meeting in Moree.

Regional Development Australia (RDA) is a national network of committees made up of local leaders who work with all levels of government, business and community groups to support the economic development of their regions. “RDANI has attracted more than $20 Mil. in grant funding to Northern Inland NSW this year. Through economic research and consulting services, together with our skilled migration projects, we are really making a difference to the region’s economies and communities,” Mr. Stewart said. “Importantly, we now are mostly self-funded. Our Federal Government funding has become a small proportion of our revenue.”

“Some of our counterparts have been impacted by funding cutbacks, as well as turnover of staff and Committee members. It is a real positive for the region that our strong performance has meant continuity on both fronts,” he said. “Our staff are a cohesive, highly skilled and experienced team, with many years’ experience working with Councils, businesses and communities under their belt. Our Committee membership is secured until December 2020, which is fantastic because though we come from diverse backgrounds, when it comes to working towards a brighter future for our region, we are all on the same page.”
The Deputy Chair of RDANI is Cr. Ian Lobsey OAM, a veteran community leader from the Liverpool Plains. Ian is a Wallabadah farmer who has served as a Mayor for a quarter of a century and is a current Liverpool Plains Shire Councillor.

The most recent Committee member appointment is Louise Gall of Moree, whose position was vacated by former Narrabri Shire resident Elizabeth Tomlinson. Louise has a wealth of regional marketing, facilitation and agribusiness experience both here and overseas. She is currently a Project Officer with the Gwydir Valley Irrigators Association.

“I am delighted to be part of this pro-active organisation. I am passionate about seeing our regional livelihoods and lifestyles better appreciated and respected,” she said.

All of the RDANI Committee positions are voluntary and members share a passion and dedication to the region they call home. Les Parsons of Inverell is a long-time member of regional development and tourism bodies. Les owns and operates Olives of Beaulieu and is a Director of Gwydir Olives Pty Ltd.

Professor Neil Argent researches and teaches in the fields of regional development and rural social, economic and demographic change at UNE. Prior to academia, he was a grazier and shearer in South Australia.

Cr. Sue Price is a farmer from the Mungindi area and has been actively engaged with the community since moving there in 1982. Sue was elected to the Moree Plains Shire Council in 2008, including as Deputy Mayor.

Inverell-based Grahame Marriott has a sustainable agriculture and communities focus, is a Board member of Northern Tablelands Local Land Services and remains a member of the Governance Institute of Australia. Grahame has worked with the Commonwealth Department of Finance, the Industries Assistance Commission and has been a wool classer. He has been a leader in skills development and employment sectors in Inverell.

Uralla shire resident, Lauren Zell is a Regional Clean Energy Co-ordinator, who has been working on business and residential clean energy and energy efficiency for over eight years. She was recently awarded a scholarship to study a Masters of Energy at the prestigious International Energy Centre. Coming from a rural background, Lauren is passionate about sustainability, growing regional communities and volunteering with local organisations, such as Backtrack Youth Works.