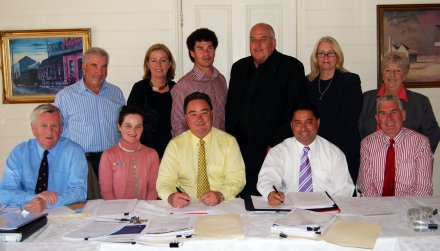 A new era has begun for the New England North West, with the first meeting of the newly formed Regional Development Australia - Northern Inland in Armidale on Friday.

The inaugural meeting of Regional Development Australia - Northern Inland (RDANI) was a grueling session, as the foundation committee members debated strategic directions, projects, and immediate priorities, while establishing the operational foundations of the new regional body.

The foundation Chairman on the Committee, Kevin Abey of Armidale described the regional implications of seeing Regional Development Australia up and running in Northern Inland NSW. “This historic first meeting was a fantastic opportunity to get together with the members of the new Committee. It was a tough day, in terms of all of the issues that we had to go through but we are passionate about this region and keen to get on with the job,” he said. “In our first meeting, we basically worked through the paperwork, funding agreements, processes, the charter and there’s much more groundwork to undertake in the next few weeks.

The new committee is diverse by design. Of the dedicated dozen, there are six from the former (State Government funded) Northern Inland Regional Development Board (NIRDB). Mr. Abey’s Deputy Chair, New England Credit Union CEO Kevin Dupé is also of Armidale, but the make-up of the Committee is regionally representative. Members come from right across the region, representing the major centres such as Tamworth, Moree and Gunnedah through to smaller communities, such as Deepwater and Willow Tree. “Everybody is bringing to the table a wide variety of skills and experiences that will combine to the benefit of the region,” Mr. Abey said.
He added that staff from the former NIRDB and Area Consultative Committee will also provide strength, expertise and continuity to the new organisation. “In this particular region, we are privileged that our predecessor organisations embarked on and have managed a number of fantastic projects, which this Committee is intending to continue so we can deliver those outcomes, advantages and benefits to our regional communities.”

“Regional Development Australia is now the face of regional policy in NSW and across Australia. Our role will be to identify and inform Governments about issues affecting this region,” Mr. Abey said, while accepting that the greatest challenge in representing Northern Inland NSW is the region’s diversity. “We’ve got the water and mining issues, for example. The indigenous employment and skilled migration programs that we have in place have been yielding real regional results. We need to raise community awareness of Government programs. There’s a lot of money on the table, to support or encourage business growth and infrastructure development. However, the co-ordination of regional development initiatives will clearly be our priority, being a key facilitator of change and development in the region - parochialism cannot play a part in this.”

According to Mr. Tydd, increased resources will mean regional results beyond what could have been delivered by the now former NIRDB and New England North West Area Consultative Committee. “The new structure will allow for identification of areas of need at more targeted and responsive levels than the two previous organisations were capable of. Communities, business and industry groups now have an efficient conduit, linked to Federal and State Governments.”

Kevin Abey explained how the new organisation will function as governmental eyes and ears, in Northern Inland NSW. “Each Committee member will highlight the needs of their respective communities. The RDANI Committee also wants to hear from the region’s communities directly. “We’ll be convening Committee meetings bi-monthly, throughout the region. We’ll start in the Northern Tablelands and we’ll look to engage and work with local councils when we visit each centre. The invitation and opportunity will be there for Council and community representatives to bring grassroots issues to the Committee. The office in Armidale is also open to ideas and key regional issues,” Mr. Abey said.