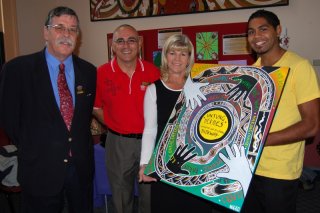 The New England North West region’s Aboriginal Customer Service Officer for Fair Trading, Brett Cunningham organised the local Aboriginal art competition. “We had strong entries from Uralla to Glen Innes, west to Inverell and throughout the Armidale area. Artists ranged in age from five to over 50. It is continuing to grow in leaps and bounds,” he said.

Deputy Chair of RDANI, Herman Beyersdorf, said the Aboriginal art competition contributes to regional development. “It was clearly worthy of our support because it is regional and we support the economic and social development of the region. It delivers cultural benefits, encouraging Aboriginal participation in local art scenes and pride in Aboriginal art, for Aboriginal and non-Indigenous people. We saw artists of all ages put a lot of effort into some great Aboriginal themed artworks and prize winners appreciated the public recognition,” he said.

The Open Indigenous Award (work by an Indigenous artist) went to Armidale’s Nicholas Levy. It was the second consecutive year that the promising local artist took out the major award, yet his two winning artworks have been vastly different. “My artwork was based on the theme for NAIDOC Week 2010, “Unsung Heroes – Closing the Gap by Leading Their Way. Into my painting, I put quotations and different sayings that reflect what the theme means to me. I also incorporated old, traditional styles of Aboriginal art.”

Aboriginal art is more than culturally significant to Nicholas Levy. “Painting has been in my spirit ever since I was little. I’ve always drawn and always painted, or tried to. I’ve developed it over the years. It means a lot to me. It’s part of my culture. It keeps me strong, in myself. I paint so other people can enjoy it as well,” he said.
Brett Cunningham surmised that the art competition is an ideal way to celebrate NAIDOC Week. “It is also an opportunity to provide information about the services Fair Trading offers, and our Aboriginal Action Plan in particular,” he said.

Tiffany Lowe of Armidale, who won the Indigenous Youth Category (12-18 years), with “A Hero”.