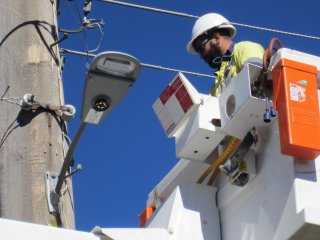 When it comes to lighting energy efficiency, seven Northern Inland NSW Councils are switched on and shining bright on a national level, thanks to Regional Development Australia Northern Inland (RDANI). “We are fielding increasing requests to talk about the success of our Northern Lights Project from right across the country,” said RDANI Senior Project Officer David Thompson. “I will be giving a presentation about what our region has achieved at the 4th Annual Australian Smart Lighting Summit at the Melbourne Convention and Exhibition Centre, held on 6 and 7 September, 2016.”

“This summit is touted as ‘Australia's Leading Energy Efficient Lighting Event focusing on Street, Outdoor, Urban & Public Lighting’ and it is a great opportunity to put Northern Inland NSW in the national spotlight as an innovative and progressive region,” Mr Thompson said.

Savings were achieved both in energy costs, and on light maintenance costs due to an anticipated longer life than the old mercury vapour and compact fluorescent globes.

“What we’d like to do now is keep the energy efficiency ball rolling for councils by conducting a similar project for the remaining six councils in our region who were not involved in the initial project.  Finding some government funding to implement another project would be helpful because the capital cost of LEDs is higher, though their payback period is still favourable,” said Mr Thompson.

“Ideally as well as LED street lights, we’d also like to include other energy efficiency initiatives and renewable energy options in the project, and assist both councils and businesses.  Making use of the NSW Energy Saving Certificates would help boost the financial attractiveness of the project”.