RDANI Skilled Migration Senior Project Officer, Kim-Trieste Hastings said a botched visa application can cost employers dearly, in both time and money. “In recent weeks I have assisted employers who lodged incorrect visa applications to the Department of Immigration and Citizenship (DIAC). The rejected applications mean the process has to start over and I have provided assistance in the identification of the correct way forward."

Trade and Investment NSW has provided financial support to RDANI as it works to raise awareness of its skilled migration role. "RDANI assistance with migration matters is free as we are here to support the region and answering immigration questions is how we can help," Ms Hastings explained. However, there will be a fee charged for certifying employers as part of the employer sponsored migration program."

Ms Hastings warned that while DIAC is trying to streamline and simplify some visa programs, another raft of immigration reforms will be implemented from 1 July this year, making RDANI’s assistance in talking through the visa options and migration hurdles all the more crucial right now. Such changes include increasing the upper age limit from less than 45 to less than 50 years of age; changes to existing English language and skill level requirements and the introduction of a consolidated sponsored occupation list to replace the 457, the Employer Nomination Skilled Occupation List and the State Skilled Occupation List. 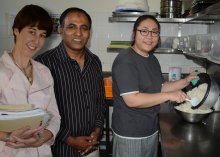 RDANI has helped many of the region's employers to recruit staff from oversees when appropriately skilled workers could not be found locally, such as Peel Street, Tamworth’s new new dine-in/takeaway business 'Black & White Pepper' run by Arif Rahman whose wife is a GP in the city. Working with Kim-Trieste Hastings, Mr Rahman has been finalising the visa paperwork for Choohee Lee from South Korean who is an Indian and Australian cuisine chef. She came to Tamworth in October, 2011 after arriving in Australian in 2007 and undertaking training in Sydney. Mr Rahman has worked hard to revitalise a business in Tamworth's CBD and has plans for another in Northgate. Yet, he said that the hospitality skills shortage has really made it difficult. "We advertised a number of times in the Tamworth area and could not find anyone in the local area," he said. 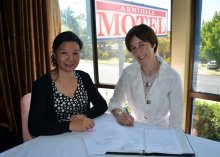 Sheryl Deng took over as owner of the 'Armidale Motel' at the start of 2011. In 14 months, she has been unable to find a Chinese chef to fit the special plans she has for her restaurant. "I want to build on the proud heritage of the 'Armidale Motel'," she said. "The work that Kim-Trieste Hastings from RDANI is doing for employers, with businesses like mine in this region, is fantastic. Recruiting my staff from oversees is the only option."

More information on the Australian immigration reforms can be found at: www.immi.gov.au/skilled/