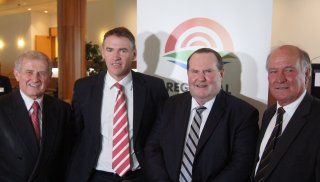 Mr Peters is thrilled that such a results focused organisation has been established. “It’s great that the importance of Regional Australia has been recognised and I’m honoured to be part of such a dynamic, passionate group of people”, he said.

“Regional Australia is home to one-third of the country’s population and contributes nearly 70% of our export revenue, providing a massive opportunity to build Australia’s national wealth. To capture this opportunity and to harness this great potential, the Regional Australia Institute has been established to develop new and innovative ways of thinking about key regional issues”, Mr Peters said.

The RAI is an independent apolitical think tank which has been established to conduct research into priority policy issues impacting areas of Australia that lie outside our capital cities. The goal of the Institute is to generate new ideas, inform public debate and to bridge the gap between academia and policy. The RAI will engage the best brains both domestically and internationally to find innovative solutions to previously intractable problems.

The RAI is governed by a Board of eminent Australians with a passion for Regional Australia. Chair Mal Peters is joined by Professor Ngiare Brown, Professor Sandra Harding, Mr Grant Latta, Rt Hon Ian Sinclair and Mr Christian Zahra. “This group of people have extensive knowledge of policy implementation at local, state and federal government levels and they bring a diverse range of skills from governance and policy development to social research, industry, trade and small business.”

“I would encourage anyone with good strategic ideas that can result in achievable policy outcomes for regional and rural Australia to get in touch with the Institute”, Mr Peters concluded.