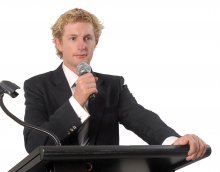 With nominations now coming in for the 2011 Regional Development Australia Northern Inland Innovation Awards, plans for the gala presentation night are being finalised. To be held this year at the Gunnedah Services and Bowling Club on Friday, 28 October, these regional awards will showcase local innovation success stories.

RDANI Executive Officer, Nathan Axelsson has announced that ABC Radio New England North West Station Manager, Jennifer Ingall will again be the MC for awards night. Last year's Innovation of the Year Award recipient, Ross Hubbard from Narrabri-based SustainAg Global will give a brief presentation about his innovation, what winning the award meant to him and the boost it gave his business.

The awards are coordinated by RDANI Senior Project Officer, Kim-Trieste Hastings. She has revealed that the awards presentation night will feature prominent inspirational guest speaker, Michael Crossland. "His life is a widely honoured 'success against the odds' story, which he regularly presents to corporations, schools and universities worldwide," she said.

At 11 months of age, he was diagnosed with an aggressive cancer of the central nervous system called Neuroblastoma. This tumour had taken over half of his body and survival was considered extremely unlikely. A little older and he was told that school and sport were out, due to the likelihood of infection and fatigue. Michael overcame adversity by striving for things others took for granted, like school.

After many hurdles and bed-ridden years, Michael made his dream of playing baseball in the USA a reality. He was drafted into the Australian Expos Baseball Team at the age of 15. While on a US tour with the Expos, he was drafted by a Texas baseball team (at age 16), with a scholarship deal to play college ball in Texas. Michael Crossland is now an accomplished businessman, with many top Australian and international accolades.

Ms Hastings said that, as with the Northern Inland Innovation Awards themselves, the region can gain much from the Michael Crossland story. "Regional businesses face many hurdles which their city counterparts do not; from the tyranny of distance to broader market exposure, along with labour attraction and retention issues," she said. "Businesses and organisations need to have passion, motivation and innovation in order to seize a competitive edge, expand or be more efficient and effective."

"The relevance of these awards to the region's development has attracted public and private sector support. I am pleased to announce that the NSW Department of Trade and Investment, Regional Infrastructure and Services has just come on board as a supporter for this year’s Innovation Awards," Ms Hastings said. "The 2011 Northern Inland Innovation Awards are supported by the Federal Government's Enterprise Connect; AusIndustry; New England Mutual; AgriFood Skills Australia; Austsafe Super; and Eastern Star Gas, with RDANI being the primary funding body."

Nominations are being sought from throughout the Armidale Dumaresq, Glen Innes Severn, Gunnedah, Guyra, Gwydir, Inverell, Liverpool Plains, Moree Plains, Narrabri, Tamworth Regional, Tenterfield, Uralla and Walcha Council areas. "If you are doing something better through a creative approach or have an innovation, then we want to hear from you," she said. "Categories are: Agriculture / Horticulture and associated services; Tourism / Leisure and Services; Professional and Retail services; Manufacturing and Engineering; and Research and Education.
The closing date for nominations is Wednesday, 21 September."

"Past winners have found the regional recognition to be a validation of their innovative efforts. By nominating, these businesses show how progressive this region is and may help to inspire others," Ms Hastings said.

Tickets for the Awards presentation evening need to be purchased by Friday, 14 October, at a cost of $60.00 pp.
For further information contact Kim-Trieste Hastings on: 0427 008 572 or go to the Award’s website: www.niia.com.au