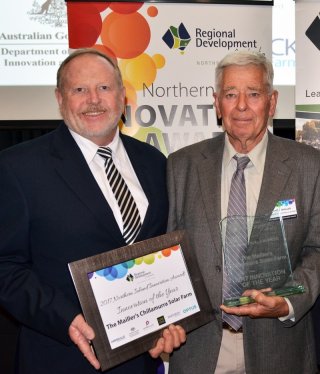 “Last year, we marked the 10th anniversary of the Innovation Awards. We looked back on what this highly--specialised, regional awards program has achieved and we’ve really done what we set out to do and more. Through NIIA, we have raised awareness of the importance of innovation to our region’s growth,” Mr. Stewart said.

“Innovation is now a category in local business awards around the region, as well as in regional and State business chamber awards. Our business communities are certainly more pro-active and innovative than when NIIA began. Today, there are more local business representative bodies and business awards than ever. RDANI put the spotlight on innovation and those who have achieved through being innovative and it is time to pass the baton.”

“RDANI remains focused on business and jobs growth, together with the general development of the region’s economy. With innovation being a key ingredient to growth and advancement, we are currently investigating new ways to promote it,” he said.

The Northern Inland Innovation Awards will remain a source of inspiration, according to RDANI Executive Director Nathan Axelsson. “Inspiring videos can be viewed via the Awards website, www.niia.com.au and on our YouTube channel,” he said. “These home-grown innovation stories are well worth a look and illustrate how diverse and innovative our region is on national and international levels.”

“Each Northern Inland Innovation Awards featured professionally produced videos about the award recipients, which were shown on a big screen at the gala awards night, held in a different location in our region each year. Those videos are great case studies of innovation, by a broad range of businesses and organisations. There are shorter clips about Finalists and category winner videos that average two to three minutes. I especially encourage people to checkout the Innovation of the Year recipients: like The Mailler family’s Chillamurra Solar Farm at Boggabilla in 2017, Gunnedah’s Wholegrain Milling Company in 2016, the value-adding exporter Lively Linseed in 2015, UNE’s Smart Farm in 2014 and ICT International of Armidale in 2013, ZooWhiz by Edalive of Armidale in 2012 and Photo Create at Glen Innes in 2011,” Mr. Axelsson said.

“We are proud of the Northern Inland Innovation Awards legacy. RDANI was the major sponsor and we worked hard to get the entries in from throughout the region. We could not have produced them without generous support from public and private sponsors over the years, such as the Australian Government’s Department of Industry, Innovation and Science, Prime Super, the University of New England, White Rock Wind Farm, Local Councils, Optus and Telstra,” he said.

“In these difficult times, the attraction of sponsorship dollars and people with the time to promote their innovations are increasingly challenging. It is timely that we feel the Northern Inland Innovation Awards achieved what we set out to do,” he said.

Mr. Stewart is also pleased to be reflecting on the end of the Innovation Awards with satisfaction, rather than sadness. “To anyone out there, with a Northern Inland Innovation Awards trophy or Highly Commended certificate, the RDANI Committee and staff congratulate and thank you for your valued contribution to our region.”