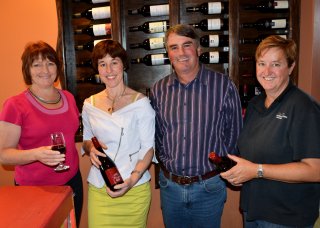 Wine growing in Northern Inland NSW first began in the Inverell area in 1852. The bulk of the vines in today’s industry have been planted since 1996. Concentrated around the Tenterfield and Ashford area, NEWGA began in 1996 as a buyer group. SNEVA was formed in 2002 for regional wine industry promotion, encompassing an area from Nemingha in the south, east to Walcha, north to Glen Innes, and out to Delungra. The merger was voted on and strongly supported by both organisations.

A unanimous vote made Andrew Close from Mihi Creek Wines (south-east of Armidale) the foundation President. “We now have a united front and we’re singing off the same hymn sheet. This merger means a complete regional approach to representing the wine industry. It will deliver savings and gains in marketing, political and statutory issues, administration and logistics,” he said. “NEWIA will now oversee the Branding Strategy Alliance and the implantation of the New England Wine brand, alongside Winestream Communications.”

Mr Close explained why the formation of the ‘New England Wine Industry Association’ is an important development for the wider region. “Wine growers are delivering economic and tourism benefits for the region.”

“New England wine growers produce a top quality product. Numerous awards, together with rapidly growing market recognition are testament to that. We’re increasingly about much more than growing and selling a product. Linkages are evolving between cellar doors, vineyards and restaurants. There are five wine trails meandering through the region and wine tours are showcasing New England’s back roads,” Mr. Close said.

Deanne Eaton from Deetswood Wines, Tenterfield, is the foundation Vice-President. “The merger is a very historic step in the development of the wine industry. We’re really excited about moving forward as one group, no longer divided in two by a line on a map that somehow separated two parts of the one area,” she said. “We can achieve more by advertising and marketing together. We’re all part of the New England wine region now, as a united industry group,” she said.

Scott Wright has a vineyard, cellar door and winemaking operation at Glencoe. “This merger is great for the region,” he said. “The regional marketing approach has made a real difference. The critical mass is important. A lot of people come and buy our wine because it’s part of their New England experience. We’ve got RDANI’s Food and Wine brochure in our cellar door and tourists love to see the region’s produce mapped out for them.”