Welcome from the Chair 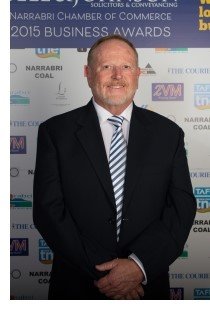 Welcome to this final edition of our newsletter for 2018. We have had a great finish to the year, topped off by the fantastic results to come out of our 10th annual Northern Inland Innovation Awards. A brilliant night was had by all who attended and we appreciate the support from businesses, organisations, Local Councils and sponsors from right across the region. Congratulations to all the finalists and winners, in particular, the Innovator of the Year, Chillamurra Solar Farm in Boggabilla. With no government financial assistance or support sought for the project, they were able to complete the project in record time and for 40% cheaper than a comparable system.

We would sincerely like to thank all the businesses and organisations who responded to our Skills for the Future Survey. You still have the opportunity to tell us your first-hand experiences of hiring and retaining staff and the challenges encountered in doing so – simply go to our homepage www.rdani.org.au. We hear so often the anecdotal stories of skill shortages, so this is a chance to get an actual evidence-base and to localise the issues to our region. The survey results will inform employers of the broader issues as well as government and VET sector policy makers. The full results will be made public early in 2018.

I would like to wish you all a Merry Christmas full of quality time spent with family and friends. See you in the New Year.

Our office will be closed for the Christmas Holidays, from 5pm on Friday the 22nd of December until 9am on Tuesday the 2nd of January 2018. 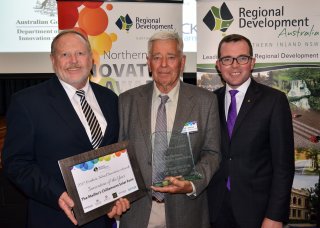 Innovation was in the spotlight on Friday night in Armidale, as our region’s brightest and boldest gathered to celebrate their successes and achievements. “We are proud of the fantastic stories unearthed at the 2017 Regional Development Australia Northern Inland Innovation Awards and those over the past 10 years they have been held. Our 10th anniversary awards night was a truly regional event, with awardees from Wee Waa to Tenterfield, Wallabadah to Boggabilla,” Regional Development Australia Northern Inland (RDANI) Chair Russell Stewart said.

The gala awards dinner was held at the Armidale City Bowling Club on Friday night, 24 November 2017. A diverse range of businesses and organisations were represented. More than 140 attendees saw videos and heard the stories of the award-winning innovators, with the overall RDANI Innovation of the Year Award going to The Mailler’s Chillamurra Solar Farm in Boggabilla, which also won the Optus Armidale Manufacturing and Engineering category.

“We have developed a solar farm approach that is simpler and 40 percent cheaper to construct than others of similar scale. The return on investment is over 10 percent. We have created a model that other people or groups on the land can replicate. My son, Robert did the engineering and David coordinated the construction. It was a family effort that did not receive or require any government funding,” Michael Mailler said.

Magic Electricity Box of Armidale and the Rail Journeys Museum in Werris Creek were recognised through Highly Commended Awards. Renee Neale from Wholegrain Milling in Gunnedah won the overall award last year and was guest speaker this year.

RDANI Executive Officer Nathan Axelsson said that the Northern Inland Innovation Awards perform an important role within the region and beyond. “This is a very focused awards program and every entry tells a significant story of perseverance and achievement. People are often too busy devoting their energy to the every day to think about what is innovative and distinctive about their approach or product. Innovation is a key driver of economic growth and enhancement of services in our communities. There is much to be gained from identifying, rewarding and promoting our innovators,” he said. 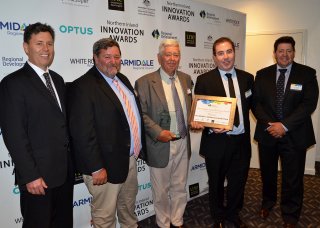 Innovation of the Year
and
Manufacturing and Engineering Award

The Mailler's Chillamurra Solar Farm, Boggabilla
Michael Mailler was a broadacre dryland farmer in Northern Inland NSW since 1966. The family’s innovations in agriculture were industry changing. Yet, Michael has endured so many disheartening seasons, compared to his earlier farming experience that, to him, climate change is a very real crisis. His response is a passion for making a difference, as reflected in his “field that gleams”.

In 2015, the Maillers sold their farms and bought a 120 hectare property to develop a medium scale solar farm. Michael Mailler, with his sons Robert and David engineered an amazingly cost-effective solar farm model. A second solar farm is being manufactured on-site in Queensland and the Maillers hope that the model that they have engineered will inspire others.

Mailler family’s Chillamurra Solar Farm innovative peg system is the second largest of its kind in the world. That innovative approach and the smaller panels used made it 40 percent less expensive than other systems. Simplified engineering and construction meant that the largely unskilled labour could be used. The project was an economic stimulus just below the NSW / Queensland border, with $400,000 going to local wages and $100,000 to contractors.

The plant was turned on in May and had all units working in early July. The plant has an inverter capacity of 3.6 MegaWatts and panel capacity of 4.8 MegaWatts and is currently producing an average of 28 MegaWatt hours per day. The total cost was close to $6milion and the income generated by the electricity being pumped into the grid is approximately three quarters of a million dollars per year.

The engineering simplicity, towards the sustainable manufacture of electricity was achieved with the support of a small group of stakeholder investors but no Government funding.

Beyond prosperity and abundance, the Mailler’s solar farm is an innovation that is a shining light in the dawn of a new era, in which individuals can viably contribute to a more sustainable world.

The finalists in the Manufacturing and Engineering category were Warialda Engineering and Welding and Blue Sky Contracting, Tenterfield. 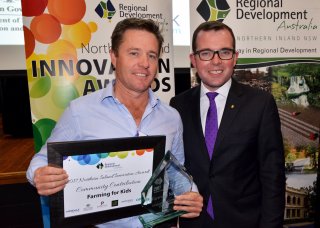 Nick Pearce from Rabo Bank who accepted the Farming For Kids Community Contribution Awards from Member for Northern Tablelands the Hon. Adam Marshall.

Farming For Kids
Farming For Kids stood tall in two categories of the Northern Inland Innovation Awards but it was for their innovative Community Contribution that the charity organisation truly deserved recognition. Committee President Charles Hill and other Liverpool Plains farmers began Farming For Kids in December 2013.

In 2017, Farming For Kids had handed over more than $80,000 to help local schools, sick children, church and community organisations, local sporting clubs and families in need. Yet, the benefits of this concept go way beyond dollars.

Farming for Kids is increasing farmers’ connectedness with their community, how they contribute and are respected as professionals. While the charitable yields are making a difference, these intangible outcomes are important for the future, particularly in encouraging and retaining the next generation of farmers and agribusiness workers in the Liverpool Plains.

Busy lifestyles and remoteness often mean that farmers are not as engaged in conventional local charities and service clubs as other business people. Farming For Kids has enabled Liverpool Plains Farmers to use their expertise to contribute to and make a difference in their communities.

The initiative is an inspiring blueprint for other farming districts. 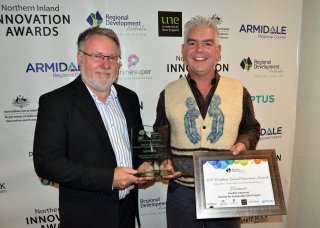 Biochar is carbonised biomass which has been obtained from sources that are otherwise openly burned or land-filled. It is used as a soil amendment to retain water and nutrients, provide habitat for micro-organisms and enhance its productivity: be that for grasslands, crops or bushland.

The finalists were Dale’s Downtown Meats of Uralla and McGregor Gourlay of Moree. Innovate Ag of Wee Waa were Highly Commended. 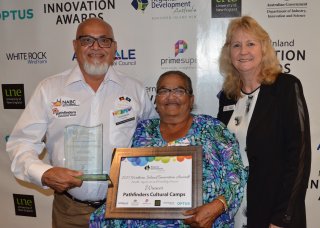 Pathfinders Culture Camps
Pathfinders is a non-government organisation providing an Intensive Therapeutic Out of Home Care model to children and young people. As part of nurturing the connection that young Aboriginals have to culture, family, community and country, Pathfinders have developed innovative Culture Camps, which are unique in the Northern Inland region. Elders are generally central to these camps. They provide a sense of cultural identity by recounting stories, as well as discussing and demonstrated traditional artefacts and practices.

The finalists in this category were Tamara Private Hospital of Tamwortth and the ASD-IT Project. Kirinari Community Services, Jennifer Brow, Touriandi Lodge of Bingarra and  Whipped...Baking for Allergies of Narrabri were Highly Commended. 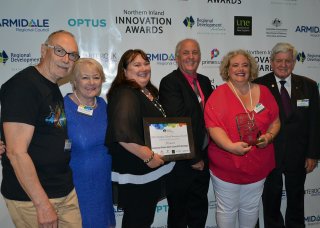 Liverpool Plains Shire Council RV Strategy
The Liverpool Plains Shire Council has successfully increased the number of people visiting the area. Council collaborated with local businesses and caravanning clubs to develop its RV Strategy. In December 2016, the Council took over the Quirindi caravan park and incorporated it into the Strategy. “Freedom camping” was seen as a strategic drawcard and there were two sites in the Shire; Wallabadah and Premer [pronounced “Preemer”]. The RV Strategy resulted in targeted marketing material and the establishment of four new Freedom Camping sites, at Currabubula, Spring Ridge, Werris Creek and Willow Tree. 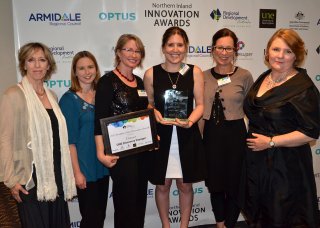 UNE Discovery Voyager
The UNE Discovery Voyager is a new outreach and engagement program. The mobile unit of passionate scientists and educators are stimulating interest in subjects where it is needed. The team travels to small or disadvantaged schools and facilitates play-based learning and exploratory discovery.

Discovery Voyager is proactively getting out and making a difference.

In a time of cost-cutting and consolidation, this approach is exceptional, as further demonstrated by the thousands of children to whom the initiative has taken the joy of scientific discovery.

Finalists in this category were PLC Armidale and O'Connor Catholic College of Armidale. Magic Electricity Box and The Australian Railway Monument and Rail Journeys Museum were Highly Commended. 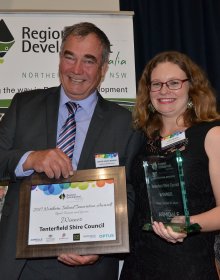 Finalists in this category were Art Shack of Wallabadah and Guyra TroutFest. The Blair Athol Boutique Hotel and Day Spa of Inverell, The Dragon Phoenix Resort, Moree and Uralla’s Thunderbolt Festival were Highly Commended.

As part of the NSW Government's Drought Strategy, a Farm Business Skills Professional Development Program has been developed to support farm business in all conditions, but particularly in relation to preparing for and responding to drought.

Farmers are now able to view a list of pre-approved courses. This list will be updated as additional products become available. Alternatively, farmers can apply for consideration to attend other professional development activities which they have identified as meeting their particular requirements.

With over 250 sub-funds, ACF provides over 500 grants annually that broadly fall into the following categories: arts and culture, community development and advocacy, community services and welfare, disability, training and employment, environment, health and medical research, education and overseas aid and development. Within these categories, target groups are also supported, including Indigenous communities and refugee/asylum seekers.

The Royal Agricultural Society of NSW Foundation (RASF) is offering an opportunity for community-minded people to be awarded up to $25,000 in funding for a community project in their local area.

The RASF invites ideas that deliver strong community benefits and result in enhanced economic and social outcomes for your community.  Projects that involve collaboration between people in your town and deliver sustained and broad community benefits will be highly regarded. Applicants will be passionate about rural and regional NSW, and have a good understanding of any issues affecting their community.

Infrastructure for local showgrounds and Show Societies are eligible. The improvements must demonstrate that they go beyond benefiting just the local Show Society in running the local Show, but rather enabling broader use by other community groups to run on-going projects or programs. While the criteria for this program are broad, the RASF does not fund wages, consultant’s fees, one-off events, operational and administration costs, travel or accommodation.