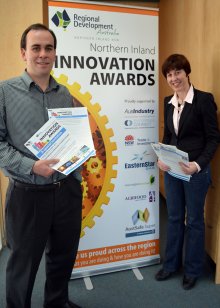 "Come along and show your support for local innovative businesses and organisations, which have made the effort to promote themselves at a regional level," RDANI Executive Officer, Nathan Axelsson said.
Mr Axelsson said judging of the 4th innovation awards is now complete. "The judging panel consisted of two independent judges and three from the RDANI Innovation Awards Committee. They had a challenging job, scrutinising record entries. There are so many innovative businesses and organisations across this region. They and their innovations are incredibly diverse; all are vital components of their local and regional economies," he said.

"We are strongly encouraging people to come along to help support and acknowledge these businesses on the Innovation Awards night. RDANI is also urging the Councils of Northern Inland NSW to see this awards night as an opportunity to connect with the region's innovators," said Mr Axelsson. "Innovation is vital to the region’s economy and the development of individual communities.”

"The Awards night will inspire and educate about just how progressive the region really is. They are a chance to learn about the amazing businesses and projects that we often don’t know exist in our own backyard."
Prominent inspirational guest speaker, Michael Crossland is expected to entertain and motivate attendees.

"Michael's life is a widely honoured 'success against the odds' story, which he regularly presents to corporations, schools and universities worldwide," Mr Axelsson said.