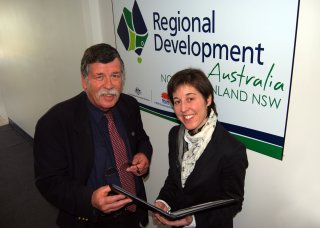 RDANI Deputy Chair Herman Beyersdorf and Project Officer, Kim-Trieste Hastings are pleased with the community input into the Regional Plan to date.

Regional Development Australia Northern Inland (RDANI) is building a regional plan that both State and Commonwealth Governments will use to determine funding allocation. The process includes public consultation meetings, to capture grass-roots insights directly from around 19 communities across the region. RDANI Deputy Chair, Herman Beyersdorf represented the Committee at the Glen Innes meeting on Tuesday night. “It was a good meeting, with a number of local community leaders present, including the Mayor and General Manager of Glen Innes Severn Council.”

“We talked about a number of issues of concern to the Glen Innes area. Greater access to broadband was one priority that I think will be reflected in a number of the region’s centres. The internet is seen as an important highway of the 21st century. Apart from this virtual highway, the potential of Glen Innes being at the intersection of two highways (north-south and east-west) was also raised, with implications of Glen Innes playing a greater role as a transport hub was also discussed,” he said.

According to Mr. Beyersdorf, getting out and communicating with communities is extremely important. “They are the communities that we are seeking to help develop, on a regional level. We need to listen to them, to hear what they want, what their aspirations and concerns are, he said. “RDANI is a body that is jointly funded by the Federal and State Governments. These public consultation meetings are a valuable and practical way to ensure that regional development efforts in the Northern Inland region are relevant and responsive to local communities.”

“The attitude of the people at the Glen Innes meeting was very positive. They appreciated the opportunity to voice their concerns, aspirations, needs and wants, which will contribute towards a regional plan,” Mr. Beyersdorf said.
The tangible outcome from the meetings and other research, conducted at the University of New England, will be a Regional Plan, designed to identify and outline responses to developmental challenges in the region. Local level issues and priorities will be collated into this strategic plan for Northern Inland NSW. The Plan will become the blueprint that RDANI will work to for the next five to ten years. It will also serve as a resource tool that will put Federal and State Government representatives in touch with the region. The Regional Plan is due to be submitted to the Government at the end of August.

In light of his lengthy history with local government in Armidale, Mr. Beyersdorf stressed that local councils must be involved in regional development. “As a regional body, we must connect with the 13 councils throughout the Northern Inland. We are working hard to achieve collaborations. It is vital that we work together for the greater good of the region as a whole. There is no magic wand, but working cohesively and regionally, we will make a difference.”

The New England round of meetings occurred in Glen Innes, Deepwater and Tenterfield last week. Meetings will take place at the Council Chambers in Bingara, 10:30am - 1.00pm on Wednesday 28 July, then at the Barraba Council Chambers, 1.00pm - 3.30pm on Thursday 29 July 2010.