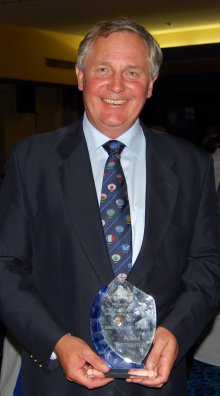 The 2010 Innovator of the Year (and winner of the Agriculture / Horticulture and associated services category), Ross Hubbard of “SustainAg Global” (Narrabri), for development of a precision cropping tool, the Moisture Manager Planter.

The annual awards program is an initiative of Regional Development Australia Northern Inland (RDANI), in recognition of the additional need for regional businesses to be innovative towards honing their competitive edge. A distinguished list of sponsors illustrates the widespread recognition of the importance of innovation and the role these awards play in stimulating it. The sponsors for this year's awards are: New England Mutual; AgriFood Skills Australia; Austsafe Super and Eastern Star Gas, with continued support being sought from Federal and State Government Departments.

“If you innovate, think outside the square, explore new directions or approaches, then RDANI wants to hear your story. We want to recognise and celebrate the uniqueness of local organisations or businesses and what sets them apart,” RDANI Executive Officer, Nathan Axelsson said.

“These awards are in line with RDANI’s objectives to support economic growth and the development of sustainable, socially inclusive communities in Northern Inland NSW,” he said. “The Northern Inland Innovation Awards showcase and promote a vast array of products, services and initiatives. Nominating not only puts your operation up for recognition on a regional level, it also helps to inspire others.”

“Proactive support from local government, Chambers of Commerce and like agencies would also be good to see. These awards are about more than promoting individuals, businesses or public organisations; they showcase Northern Inland NSW as a progressive, creative and resourceful region at State, National and even International levels,” Ms Hastings said. “Innovation isn’t necessarily invention. There are so many operations out there, large and small, which are growing and succeeding as a direct result of innovations or innovative approaches.”

The RDANI Innovation Awards Committee will select finalists for each category, who will be invited to attend the gala awards night later in the year, with the general public also encouraged to attend. The 2011 Innovation of the Year Award will be presented to the leading innovator across all categories. This year, the awards presentation night will take place in Gunnedah on Friday, 28 October.

“After the time, effort and money invested into innovation, through product development and commercialisation, past winners have stated that recognition through the Innovation Awards is a greatly appreciated validation,” Ms Hastings said.

For further information please contact the Regional Development Australia Northern Inland office on: 02 6771 2790 or go to the Award’s website: www.niia.com.au. 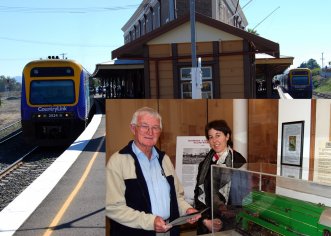 The 2010 Tourism / Leisure and Services category was won by “The Australian Railway Monument and Rail Journeys Museum at Werris Creek.” The Museum's Chris Holley is pictured in the inset with RDANI Snr Project Officer, Kim-Trieste Hastings. 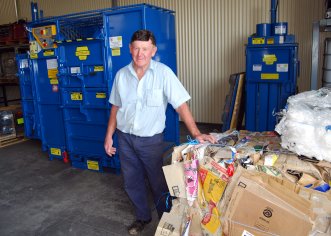 2010 Manufacturing and Engineering winner, Reg Trethewey. The holder of over 120 patents is pictured here with one of the Trethewey Industries innovations. Manufactured in Deepwater, the cardboard Autobaler can be found in supermarket loading docks around the country. 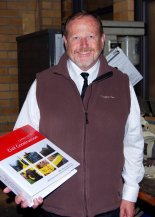 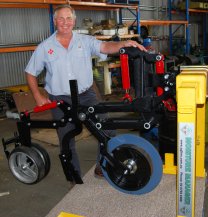 The 2010 Innovator of the Year (and winner of the Agriculture / Horticulture and associated services category), Ross Hubbard of “SustainAg Global” (Narrabri), for development of a precision cropping tool, the Moisture Manager Planter. 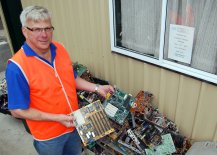 Robert Patterson heads up the 2010 winners of the Professional and Retail Services Category, Computer Bank New England, Uralla, Armidale and Inverell.
Related Pages
Share This Page With Someone