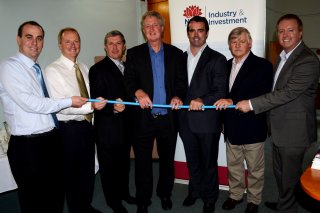 A free information session about the National Broadband Network for small and medium business operators was staged in Armidale Business Enterprise Centre’s Conference Room yesterday. Organising began less than three weeks prior to the event and interest was so high that over 60 attendees from as far as Glen Innes were in the audience. The demand for further information sessions is clear, according to Executive Officer of Regional Development Australia Northern Inland (RDANI), Nathan Axelsson. “There are a lot of myths out there in relation to the NBN and what the technology means for local communities and businesses. We will definitely be hosting more NBN information sessions in Northern Inland NSW over coming weeks and months,” Mr Axelsson said.

Representatives from a broad range of small and medium sized New England businesses attended the information session. “They know they stand to benefit from the NBN, particularly with the region having that competitive ‘first-mover’ advantage. This information session opened their eyes to exactly how they might benefit,” Mr Axelsson said.

Former UNE Physics senior technical officer, Graham Hyde began with a concise explanation of how optic fibre works and how it supersedes copper wires. Principal presenter, Alun Davies followed on from that thread. As the Head of the NBN Work Group New England and a regional communications advocate, he passionately conveyed the potential of NBN for residences and businesses in the area. Mr Davies went from explaining cloud computing to smart houses, which would foster such outcomes as sustainability and security measures and high definition video conferencing, which would boost social inclusion through greater connectedness.

NBN Co Community Relations Adviser Darren Rudd addressed the business-minded audience, updating on the rollout and explaining its delays. “It was great to get members of the local business community together. It was good for them to learn what is going on with NBN technology elsewhere in the world and why it’s commercially important that we do it right, here in Armidale,” he said.

As to when those in the first release trial zone in Armidale will be ‘switched on’…“We’re starting pre-commission trials in the next several months. We plan to have full network ready services online early next year in the first release trial zone. People there can expect to be approached by internet service providers in coming months. Naturally, consumers can start shopping around with internet retailers who have signed up with NBN Co,” Mr Rudd said.

Northern Inland NSW will benefit from Armidale’s selection as one of the first trial sites in Australia. “When we come to a location, we keep building out because we’ve become familiar with the area, the stakeholders, the available labour and contractors – it’s the efficient way to go. An announcement will be made in the next couple of months regarding the second release site, being the rest of Armidale.”

The announcement of the second release site’s broader Armidale boundaries has been delayed for two reasons. “Late last year, the ACCC recommended that we reconfigure the network to enhance telecommunications sector competition. The other delay is that we are close to signing a deal with Telstra that would grant access to conduits and so on. This deal will mean significant savings of money, time and impact in the construction phase. We are optimistic that we’ll see the deal signed by Telstra management, followed by shareholder ratification, within three weeks,” Mr Rudd said.

Industry Capability Network (ICN) Manager for Northern NSW, Gregory Mann and the ICN NBN Sector Manager, David Anderson were also on hand to answer questions on the construction phase of the NBN rollout.