State’s Largest REZ to be in the Northern Inland 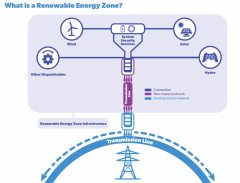 With the support of a $80 million investment from the NSW Government, the New England region will become the state’s largest Renewable Energy Zone (REZ). These zones involve the development of new power grid infrastructure to connect multiple energy generators in the same zone. They are effectively the modern-day equivalent of a power station, and combine the generation, transmission, storage and system strength services. Three renewable energy zones are planned by the NSW Government for the New England, South-West and Central-West Orana. This infrastructure not only prepares the state for the expected retirement of thermal power stations but is also expected to provide a range of other benefits including improving electricity reliability, increasing affordability, and supporting emissions reductions.

Member for Northern Tablelands, Adam Marshall said the 8,000 MW REZ will deliver the jolt needed to recharge economies and communities right across northern NSW. The New England REZ is expected to attract $12.7 billion in investment for new energy infrastructure and will encourage employment opportunities, with the REZ expected to create 2,000 construction jobs and 1,300 ongoing jobs. “For the first time in our region’s history, we are on the cusp of being a net exporter of energy building wealth in our communities,” he said. “The benefits of the New England REZ blow way beyond the renewable energy sector, offering the opportunity for mass investment in things like public roads, telecommunications infrastructure and health services. Quality infrastructure is not only vital for the efficient delivery of electricity to the network but will also play a role in encouraging people to relocate to our area to work on these ground-breaking projects.”

You can find out more about Renewable Energy Zones and how they are part of the NSW Government’s Electricity Strategy and Transmission Infrastructure Strategy on the Energy NSW website.