Inland Rail Expected to Save the Agricultural Industry $70M Per Year

Research conducted by the CSIRO has determined that the Melbourne to Brisbane Inland Rail project could reduce transport costs for the agricultural industry by an estimated $70 million per year by shifting existing agricultural road trips to the lower cost transport option the Inland Rail provides. This is equal to between $64 to $94 per tonne of savings (depending on back-loading), and 923,000 tonnes of horticultural and processed agriculture are expected to be shifted off our roads and onto the railway. The analysis also indicates a substantial benefit to the community in the study area through a reduction of up to 63,000 heavy vehicle trips per year along various segments of the Newell Highway. 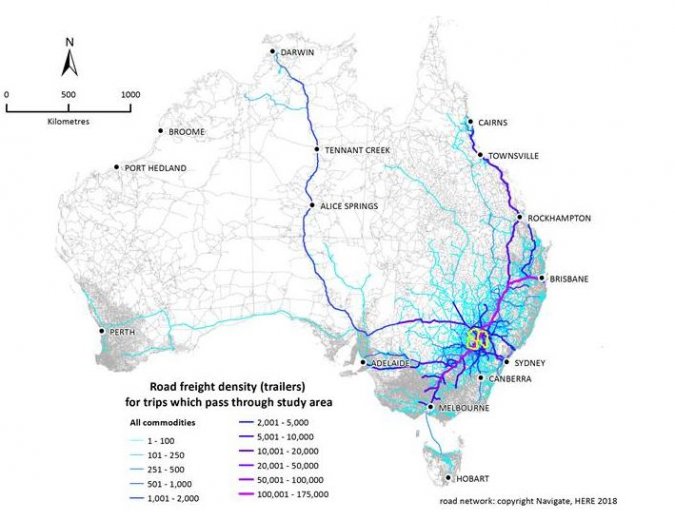 “Our research has shown that Inland Rail would bring an improvement in rail travel time and transport cost, particularly important when considering perishable products. This would make it a lot more competitive with the travel time advantages of road transport” CSIRO TraNSIT leader Dr Andrew Higgins said.

“A big cost in food production is transport, particularly given the large distribution of where and when it is grown across Australia, and the long distances to major domestic markets, often over 1000 kilometres,” Dr Higgins said. "These types of savings with Inland Rail would mean food companies would have lower cost access to markets further away than they supplied to in the past.”

Utilising the CSIRO’s computer logistics tool TraNSIT (Transport Network Strategic Investment Tool), along with extensive industry engagement, the Parkes to Narromine area of the Inland Rail was used to estimate the potential cost savings for the entire project as it is the first part of the track to commence construction. During the analysis, the CSIRO considered horticulture and processed agriculture, such as meat, rice and dairy products. The study was the first time such a detailed analysis on road to rail supply chains in Australia has been conducted.

As a next step, TraNSIT will now be applied to the broader Inland Rail corridor (commencing with the southern corridor from Narromine to Seymour in 2019) to obtain even more detailed cost savings across a broader range of commodities. New commodities will include grains, cotton, livestock, wool, minerals and general freight. The Department of Infrastructure, Regional Development and Cities will be working closely with State Governments, local councils and other key stakeholders to ensure the project complements local land use planning and freight network strategies.

TraNSIT has been used in previous research to test the benefits of transport infrastructure in regard to upgrading roads in Northern Australia and calculating agriculture and forestry transport benefits for industry and various levels of government. The TraNSIT computer modelling tool works by analysing every possible combination of transport routes and modes (road and rail) and determining those that optimise vehicle movements between enterprises in the agriculture supply chain.

Further information about the Supply Chain Mapping Study, is available on the Inland Rail website.