A Taste of Politics for Student Leaders 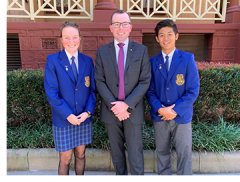 Earlier this month, student leaders from around the region were hosted by State MP’s in Sydney as part of the Secondary Student Leadership Program run by the NSW Parliamentary Education Branch. The day allowed the students to gain a taste of NSW politics and included a tour of both chambers of the NSW Parliament and Government house, as well as the opportunity to talk to MPs about their lives as politicians.

Each year secondary school leaders from all high schools in New South Wales are invited to visit the Parliament to participate in the program. “This is such a great opportunity as the program recognises the school leadership role of students and provides them with the opportunity to meet their elected representatives.” Said Kevin Anderson MP.

"School leadership is where many national, state and local government representatives are inspired to pursue their careers in community service.” Adam Marshall MP said. "This program provides students with the opportunity to meet their elected representatives and to develop their knowledge of constitutional and parliamentary proceedings including the role of the Governor and the workings of the Parliament."