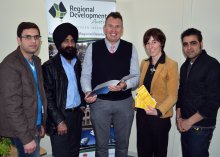 Recent free seminars on migration rule changes in Tamworth and Armidale proved to be both timely and important, with strong attendance from throughout the region. Regional Development Australia Northern Inland (RDANI) Executive Officer, Nathan Axelsson said that Skilled Migration programs administered by RDANI are vital for employers unable to find the staff they need locally. "Having representatives of the Department of Immigration and Citizenship (DIAC) come to this region and talk to employers and visa applicants can mean a great deal. It is a matter of regional equity that locals don't have to travel to Sydney or Canberra to meet Immigration staff."

In Tamworth, over 100 people attended the seminar and in Armidale, the crowd numbered close to 50. Fronting the seminars were RDANI Senior Project Officer, Kim-Trieste Hastings, the Immigration Department’s Regional Outreach Officer for the Regional Migration Initiative, Rhett Henkel and his colleague, Suzanne Gillham.

Immigration changes, which come into effect from July 1, include a streamlined process for temporary 457 visa holders seeking permanent residency and an online database to connect employers with migrants. Of greater interest to visa applicants in the region are changes to criteria for the Regional Employer Sponsored Visa Scheme. The English language requirement for this visa will increase and there will be a greater emphasis on Australian qualifications. The age limit will also be increased from 45 to 50. "A competent level of English, means more cohesive integration into local workplaces and communities," Ms Hastings said.

Ms Hastings said she would like to see more employers attend future seminars. "In Tamworth, we saw employers from the health and motor vehicle industries, as well as Tamworth Regional Council," she said. "In Armidale, employers represented education and health sectors. Questions centred on employer sponsored and State regional visas, plus Immigration's upcoming Skills Select program."

Concerns were raised about the immigration rule changes. Visa applicants also appreciated the opportunity to communicate their concerns with visa programs that take years to process and have forced them to move to regional centres where they have struggled to find somewhere to live while looking for a permanent job.

Visa applicants are worried that their foreign qualifications will not be equivalent to Australian qualifications. Ms Hastings clarified that the new rules will not be retrospective, "They will only impact upon those who may need to pursue a new visa application pathway in order to stay in the country. The existing rules will continue to apply to current visa holders."

A migration matter of particular interest to the Northern Inland is the difficulty in sourcing overseas workers for farm businesses. "A delegation of rural employers from this region recently traveled to meet with Minister for Immigration and Citizenship, the Hon Chris Bowen. They told him how the agricultural sector has been affected by the removal of the farm overseer occupation from Skills Australia's list of jobs officially considered to be 'skilled' in June 2010. Briefing the Minister on this local issue was a positive step," Ms Hastings said.