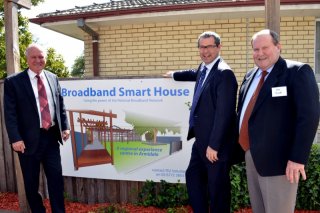 A project to build a regional NBN Experience Centre in Armidale has been realised following a visit to the city on Monday by Senator Stephen Conroy, Minister for Broadband, Communications and the Digital Economy.

After more than 12 months of behind-the-scenes work by government, education and private industry partners, the home now offers an insight into the home of the future and how the NBN will change the way we live, work and play. Led by Regional Development Australia Northern Inland, the Broadband Smart Home, located in Queen Elizabeth Drive demonstrates many of the real-world applications of the NBN, including home automation, remote health monitoring, video-conferencing, rehabilitation, education, remote business, sensor monitoring and environmental sustainability.

Senator Conroy, together with Federal Member for New England Tony Windsor, were treated to a number of live demonstrations, including the joint University of New England and Australian Centre for Broadband Innovation’s ‘Smarter, Safer Homes’ initiative which focuses on demonstrating the use of simply-installed, NBN-linked devices to help elderly people live safe and comfortable independent lives. Also on show was Neuroscience Research Australia’s project exploring exercise-based video games to deliver fall prevention training into the homes of older adults with a live-link to the Autumn Lodge Retirement Village in Armidale.

The highlight of the day was a live videoconference to Daejon in South Korea where the Minister and local Duval High School students were able to chat with Korean students in real-time over 8000 kilometres away. 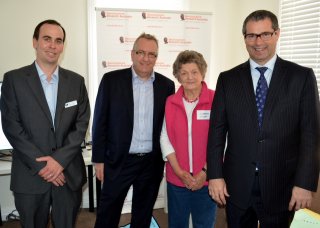 "It was great to take part in the launch of the Armidale Broadband Smart Home, which clearly demonstrates the many ways that regional areas will benefit from high-speed broadband," Senator Conroy said.

“People living in Armidale are among the first in the nation to have access to the faster, improved broadband that the NBN offers, with all the advantages of being first, particularly for small businesses, education and health sectors”, Senator Conroy said.

“High-definition video conferencing means children are able to take classes their local school doesn’t offer and people will be able to consult with a specialist doctor from anywhere in Armidale, or around the country, without travelling long distances.

“The Broadband Smart Home has the potential to be a real asset to Armidale and the wider region. I’d like to congratulate the project partners for pursuing this important initiative. It’s great to see local people taking advantage of the opportunities that the NBN can offer,” Senator Conroy said.

Anyone interested in a tour of the Armidale Broadband Smart Home can contact Regional Development Australia on 02 67712790.