Regional Energy Efficiency Project to Save Councils $400,000 per year 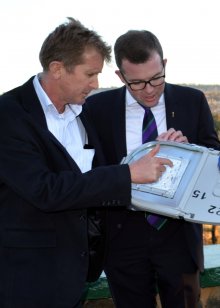 Regional Development Australia Northern Inland (RDANI) has announced the successful completion of its Northern Lights project to install LED street lights across seven local Councils, with energy savings beating all forecasts according to RDANI Chair, Russell Stewart. “The project was quite complex and we were delighted to see it completed on time and on budget,” he said.
The project delivered the first broad scale rollout of LED street light technology in regional NSW. Over 5,000 lights were replaced by Essential Energy in Armidale Dumaresq, Glen Innes Severn, Guyra, Gwydir, Inverell, Tenterfield and Walcha Local Government Areas.
The Northern Lights project received $576,000 in funding from the Australian Government to assist Councils with the capital cost of the new lights. The NSW Office of Environment and Heritage also provided funding for the services of a lighting expert to assist in project development.

“At the outset, we estimated participating Councils would save in excess of $200,000 per year and reduce their greenhouse gas emissions by more than 1,000 tonnes of CO2 per year,” he said. “Having analysed and compared the seven Councils’ street light power bills from January 2015 and January 2016, we can now see that participating councils have cut energy and maintenance (SLUOS) costs, by a combined $400,000 per year. The cost-benefits of this project are also beyond expectations with an average pay-back period of 1.8 years.”

The Northern Lights project also delivered energy efficiency education. Peter Stanley was employed as an Energy Efficiency Education Officer and travelled the region with custom-built educational displays to physically highlight how households and businesses could cut their energy costs.