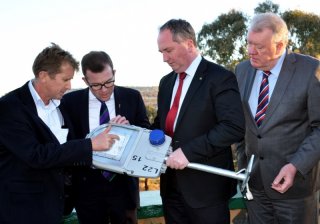 Regional Development Australia Northern Inland’s Northern Lights project has been selected as one of 43 finalists, in the Community Sustainability category, in this year’s prestigious Green Globe Awards.

“The Green Globe Awards are known as the most prestigious environmental awards in NSW. We are honoured and proud that our Northern Lights project is being recognised as a finalist,” Regional Development Australia Northern Inland (RDANI) Acting Executive Officer David Thompson said.

The Northern Lights project has been a big energy efficiency light-bulb moment for seven Northern Inland NSW councils. Facilitated by RDANI, the project has Essential Energy upgrading street lighting to the latest LED technology in Armidale Dumaresq, Guyra, Glen Innes Severn, Tenterfield, Inverell, Gwydir and Walcha Shire Local Government Areas. The installation recently got underway and it is hoped that it will be completed by the end of 2015.

Developed and administered by RDANI, the Northern Lights project received $576,000 of funding from the Australian Government. The project will replace around 5,000 mercury vapour, metal halide and compact fluorescent street lights with the latest LED technology, collectively saving 1,000 MW hours of energy and in excess of $200,000 per annum in electricity costs. These suburban street lights will not only use dramatically less power, they will also require less maintenance.

Finalists were chosen by an independent panel of leading environmental experts in the fields of energy, water, waste, sustainability and environmental research and academia. Robin Mellon, Green Globe Award Judging Panel Chair describes the high calibre of this year’s nominations.

"It’s remarkable to see the sustained effort from not only NSW's largest corporates but also councils, small and medium businesses and community groups in the Green Globe Award nominations this year. Nominees are now addressing sustainability across more areas of their business than ever before, with many looking at long-term visions, social and shared value, and holistic initiatives, rather than simply their short-term goals,” said Mr Mellon.

To read a summary of all 43 finalists visit www.environment.nsw.gov.au/greenglobes

This activity received funding from the Australian Government. The views expressed herein are not necessarily the view of the Commonwealth of Australia, and the Commonwealth does not accept responsibility for any information or advice contained herein.