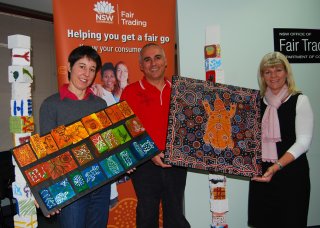 The NAIDOC Week Art competition conducted by NSW Fair Trading in the New England area is taking place again this year. The project highlights and celebrates Aboriginal culture at the local level, offering over $1,500 in prize money, spread over five categories and is supported by Regional Development Australia Northern Inland NSW (RDANI). “RDANI is proud to support this art competition, as it is important to the local community and will continue to grow,” RDANI Project Officer, Kim-Trieste Hastings said.

As part of Fair Trading’s NAIDOC week celebrations, members of the public, artists and community leaders are being urged to attend the award presentation and morning tea at the Armidale Town Hall at 10am on Wednesday 7th July.

“The 2010 theme: ‘Unsung Heroes - Closing the Gap by Leading Their Way’ recognises the importance of respect in Aboriginal culture,” Mr. Cunningham said. Artists were able to enter any medium of creative art, which addressed the theme.

Entries closed on Friday 11th June and Mr. Cunningham said they came from throughout the New England, from as far as Inverell and Glen Innes. He described the entries as exemplary and vibrant.

The art has been submitted into the following categories:

“Fair Trading has a long and proud history of supporting the Aboriginal communities within NSW. We’d like to invite people to attend the NAIDOC Week Art competition awards presentation, because it is a way of acknowledging the art and culture of Aboriginal people in this area. This competition also highlights what we are trying to do in terms of reconciliation, through involving the non-Aboriginal artists and collaborations. This is only our third year and I am confident that through further community support, this competition and the positive outcomes from it will continue to develop and expand,” Mr. Cunningham.