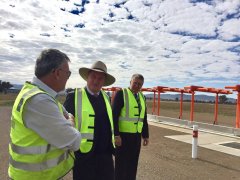 Another significant infrastructure upgrade project has been completed at Tamworth Regional Airport with the commissioning of the new Instrument Landing System last week. The project was funded through a $2 Million grant from the Australian Government and took nine months to install. The system replaces the installation from 1992 and includes a hut and antenna array that provides pilots with guidance during an approach to land. It allows airlines and the airport to continue to operate in low visibility conditions, improving the reliability of landing.

Deputy Prime Minister and Minister for Infrastructure, Transport and Regional Development Michael McCormack said that Tamworth Airport is one of regional Australia’s busiest airports, with 81,000 annual aircraft movements. “This project will strengthen local aircraft maintenance business and improve the uptake of aviation technology and education, making flights in and out of Tamworth safer and more efficient,” Mr McCormack said. “It means keeping a large number of local jobs that would have been jeopardised, following the Australian Defence Force’s departure from the airport, which is supporting the local economy.”

Federal Member for New England, Barnaby Joyce, said the Instrument Landing System upgrade would improve Tamworth's capacity to train and educate pilots. "This upgrade will help attract more regular commercial and freight flights to the New England region, expanding job opportunities in aviation and supporting industries," he said. “Replacing the old ILS installed back in 1992, this new system will benefit people and industries reliant on flight training services, including military personnel and commercial operators, as well as civilian flying enthusiasts.”

Tamworth Region Mayor Col Murray said the airport enhancements were essential to the region's future economic growth. “The upgraded Instrument Landing System supports the future of flight training here and it means we have an even stronger case to establish international freight operations,” he said. "Our airport is a community asset which delivers major economic benefits to the region through business and tourism travel and as a hub for the local aviation industry."

"Airports are expensive to operate, maintain and develop," Cr Murray said. "That’s why support of the Australian and NSW governments is essential to grow aviation business in regional areas like Tamworth."