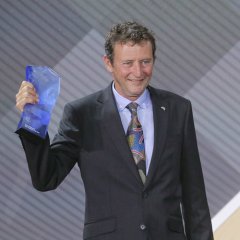 On Saturday night our own local hero, Bernie Shakeshaft received well deserved national recognition as the winner of the Local Hero category at the Australian of the Year Awards held in Canberra.

After seeing the plight of disadvantaged youth in his community, Bernie decided to take action. Starting in 2006 with a shed and an idea, Bernie founded the BackTrack Youth Works Program, turning around the lives of some of Australia’s most vulnerable kids. Using the skills he developed growing up and as a jackaroo in the Northern Territory learning from the Aboriginal trackers, Bernie developed an award-winning program that uses animal-assisted learning, agricultural skills and a residential facility.

He and his extraordinary team have helped more than 1,000 children reconnect with their education, training, families and community, offering them love and support to live out their hopes and dreams. The BackTrack program, now the subject of a documentary, Backtrack Boys, has the support of magistrates, police and mayors. It has helped decrease Armidale’s youth crime rate by more than 38 per cent, saving millions of dollars and keeping children out of correctional systems. Fifty-two-year-old Bernie’s kind, effective approach is life changing and inspiring.